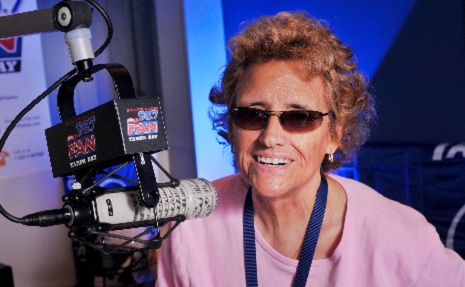 The Fabulous Sports Babe, former Seattle personality NANCI DONNELLAN, who was a pioneering voice in local and national sports talk radio, has been inducted into the National Radio Hall of Fame.  As Gord Lansdell points out on his Northwest Broadcasters blog, she was the weekday afternoon sports talk show host on KJR 950 AM Seattle from 1991 to ’94, before joining ESPN Radio. She is noteworthy for being one of the first female sports radio call-in hosts in America.

A lengthy magazine-style interview in 2012 which attempts to give a fully-rounded picture of the ups and downs of the complicated ‘Sports Babe’ is very much worth the time and effort; it’s available HERE.

The other HOF 2018 inductees by public vote are:

The inductees by the industry panel are:

Additionally, the NRHOF nominating committee voted to induct four individuals for their contribution to the industry.  Those inductees are: