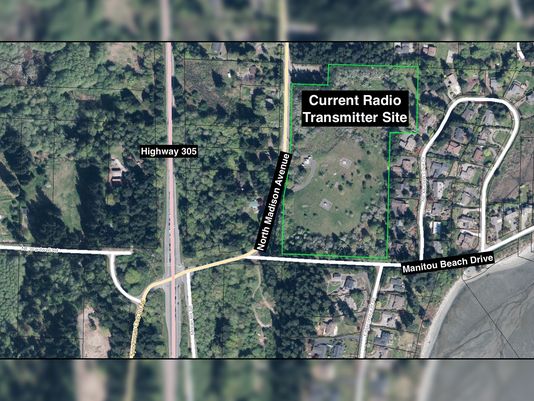 BAINBRIDGE ISLAND – A Washington-based subsidiary of Salem Media Group plans to add a new AM radio transmitter to its broadcasting site near Murden Cove and a residential neighborhood on Bainbridge Island. The city is opposing the project with concerns about interference problems those who live near the site already experience.

In March, the Federal Communications Commission approved Inspiration Media’s application to build a 50 kilowatt transmitter for the station call-signed KKOL at a site where Inspiration already has two transmitters, near the intersection of N. Madison Avenue and Manitou Beach Drive. Inspiration Media is a subsidiary of Salem Media Group, a conservative media organization that operates broadcasting stations throughout the country.

According to FCC filings and news reports, Salem recently exchanged its station KKOL for Portland, Oregon-based station KPAM, which was owned by a California group called Intelli LLC. KPAM will be brought to the new transmitting location on Bainbridge, City Manager Doug Schulze said. Salem currently operates KPAM as a news and conservative talk radio station in the Portland area.

Schulze said when the city reached out to the broadcast group it was referred to legal counsel that represents Salem. Salem Media Group did not respond to requests for comment for this story.

Schulze said the group recently began work at the site without acquiring city permits necessary for that work, prompting the city to issue a stop work order. Schulze said the city has hired legal counsel that specializes in FCC filings to advise city officials on their options related to the project.

Schulze said neighbors of the current transmitter site have reported problems with interference with cordless phones and other electronic equipment. The Grange Hall, a community gathering space north of the site, can’t use amplified sound for events at the site because of interference from the existing transmitters, Schulze said.