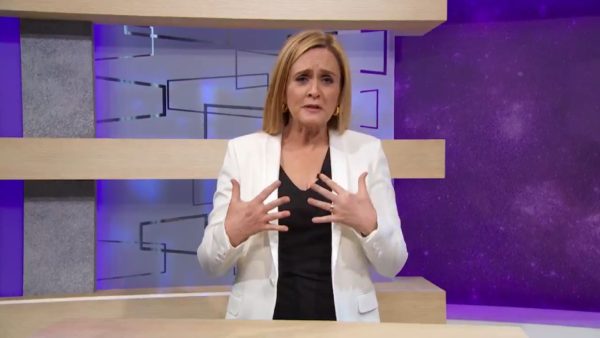 “Full Frontal” was accompanied by markedly fewer advertisers than normal on Wednesday night for Samantha Bee’s latest show — during which she apologized on air for calling Ivanka Trump a “feckless c–t.”

Only a small handful of national ads ran during the commercial breaks on Wednesday night, accounting for roughly one-third of the (number) of national ads that ran during last week’s “Full Frontal” episode. TBS filled the rest of the time with promos for other Turner properties such as “Claws,” “Conan,” “Animal Kingdom” and “Joker’s Wild.” The few national spots came from PlayStation, Epix’s upcoming drama “Deep State” and a pair of summer films in “Ocean’s 8” and “Jurassic World: Fallen Kingdom.”

Last week’s program, during which Bee’s widely publicized slur aired, featured a much larger (number) of ads from bigger brands, including Orkin, Taco Bell, Jim Beam, Haagen Dazs, State Farm and Apple. An insider told TheWrap that TBS had been expecting a smaller number of advertisers this week as they waited to see what Bee would say, and the expectation now is that things will revert back to normal in the coming weeks.

Bee opened the show with a 45-second cold open apology, before the regular credits. “A lot of people were offended and angry that I used an epithet to describe the president’s daughter and adviser last week,” said Bee before the official opening of her program. “I used it as an insult, I crossed the line, I regret it and I do apologize for that.”
.
READ MORE  HERE  AT TheWrap.com