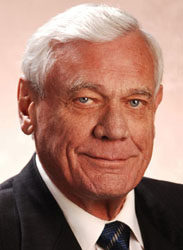 Very sad to hear from my old friend Jim Morrison that another former CKWXer from the “rock house on Burrard” has died.  Barrie Clark, who was also a Liberal MLA long before that included any kind of power in the BC Ledge, passed away Friday at age 86 after a short, unsuccessful battle with cancer.

At Barrie’s request, there will be no service, which is a shame, because I know a bunch of us would show up.

Does anyone else remember Barrie as the host of CHAN-TV’s Dance Party?   Even he recalled that casting as a rock jock as pretty strange!  But it really spoke to his versatility, and his willingness to take on anything that was thrown his way.

It should be mentioned that some of Vancouver’s most entertaining radio came from his on-air partnership with Jim MacDonald in the CKWX 9-noon time period in the 1960’s.

Barrie was a good friend to me personally in a time of need, and I believe he could be very proud of all his radio accomplishments, though he himself found greater satisfaction from his years in politics.