1/9/2018 by Jackie Strause, The Hollywood Reporter 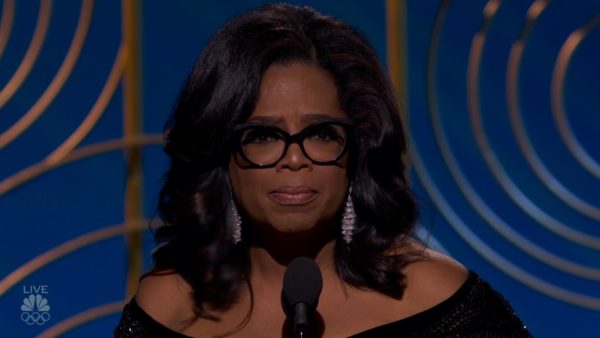 Gayle King said on ‘CBS This Morning’ that while Winfrey’s position hasn’t shifted, “You always have the right to change your mind.”

Amid churning speculation about whether or not Oprah Winfrey will throw her name into the running for the 2020 presidential campaign, the mogul’s closest friend, Gayle King, has waded into the conversation. Speaking on her show, CBS This Morning, on Tuesday, the cohost said while Winfrey’s official position hasn’t changed, she isn’t ruling it out just yet.

“I absolutely don’t think that her position has changed,” said King when pressed about the developing news story, which was sparked by Winfrey’s rousing Golden Globes speech (above) Sunday. “I was up talking to her very late last night. I do think this though, guys: I do think she’s intrigued by the idea, I do think that. I also know that after years of watching the Oprah show, you always have the right to change your mind.”

King went on to say that she doesn’t think Winfrey is “actually considering” it at this point, but that “there are people who said they want to be her campaign manager, who want to quit their jobs and campaign for her.” Adding of her close pal, “She loves this country and would like to be of service in some way, but I don’t think she’s actively considering it at this time.”

King also clarified the headline-making response Winfrey’s longtime partner Stedman Graham had given on Golden Globes night, which fanned the flames. He told the L.A. Times: “It’s up to the people. She would absolutely do it,” but King said he was responding to the question, “Would she make a good president?” — not, “Will she run?”

“Stedman would never so cavalierly say, ‘Absolutely she would do it, it’s up to the people,'” King clarified. “He would never do that.” Adding, “He is nothing but supportive, but he would never just throw it out there like that.”