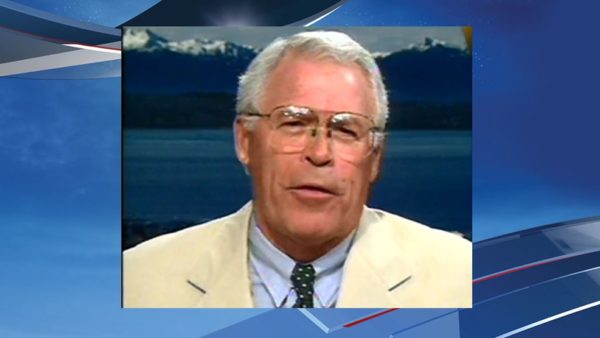 SEATTLE – Former longtime KOMO-TV sports anchor Bruce King, who retired in 1999 after 31 years with the station, has died. He was 83.
.

KOMO news anchor Eric Johnson, who replaced King after his retirement, said at the time that King was an unfailingly upbeat personality.

“Everything you see on TV, it’s not an act,” says Johnson. “He doesn’t go out there and flip on a switch and become Bruce King. It’s the way the guy is.”

Elisa Jaffe, who has worked as a journalist at KOMO-TV and KOMO Newsradio for 30 years, remembers King as someone who energized everyone around him.

“Bruce was a giant in the business,” says Jaffe. “He was always so happy, beaming, full of energy – and it was contagious.”

King began his television career in 1960 at KEZI-TV in Eugene, Ore.

After a five-year stay at KEZI and brief stint at KNTV in San Jose, he then became a producer/reporter for KABC in Los Angeles in 1966. He covered the first Super Bowl, played at Los Angeles Memorial Coliseum, for KABC.

He became KOMO’s sports director in 1968 and stayed until 1980, when he was hired to fill the same role at New York’s WABC. The next year he was back at KOMO-TV.

Johnson joined the station in 1993 and found King to be “lovely, graceful and decent.”

King, he said, “was from that era where they had stylistic flourishes on the set.”

He remembered how he could dramatically introduce the play of the night.

“He was about doing what he loved and about doing it well,” she said. “But he was also about loving life and joy.”

King won two local Emmy Awards during his career and was named state sportscaster of the year four times.

Eric Johnson compiled a video tribute to Bruce on his retirement in 1999.  You can find it HERE.