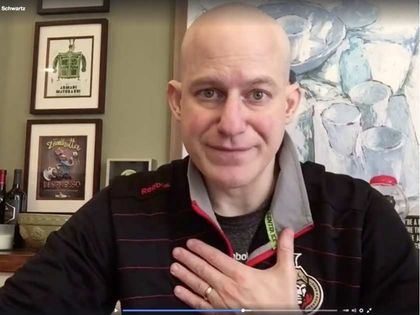 Cancer survivor “Stuntman” Stu Schwartz, seen here in a photo from September 2016, is back on air at Majic 100. CAROLINE PHILIPS.

Stuntman Stu Schwartz is back on the airwaves after what he joked was an “18-month vacation.”

The radio personality is back on Majic 100 with co-host Angie Poirier after battling leukemia. He’s now in remission.

“I was thrilled to be reunited with Angie this morning,” Schwartz told the Citizen.

Schwartz said his first day back on the air was “overwhelming” but that “it felt great to be back in the saddle.”

He admits he was a little “rough around the edges” Tuesday morning after a year and a half away from broadcasting. “You definitely feel it when you come back. In a couple of weeks, I’ll be back to my old self.”

Schwartz, an Algonquin College graduate, started out doing stunts for a local rock station in the 1990s when he earned his nickname. He is now the weekday morning host with Poirier and announcer at Ottawa Senators games.
.

After his 2016 diagnosis with leukemia, he launched the #StuStrong campaign and underwent a bone marrow transplant.

“The support from everybody in the community, that kept me going as I was going through the battle. The constant words of encouragement and my kids,” he said. “That’s why you keep doing it, that’s why you keep going. That drives you, that’s your motivation.”

Schwartz said that at one point he questioned whether he would be able to come back but got the OK from his doctors this summer.

The station reported that the phones hadn’t stopped ringing since news of Schwartz’s return broke, and listeners were quick to take to Twitter to welcome him back.

Schwartz will be on the radio from 5:30 a.m. to 9 a.m. five days a week, but his Sens schedule still remains to be seen. The organization is ready to have him for as many games as he’s willing to announce.

“Just having that support from two of my major employers, that put my mind at ease.”

Schwartz says he’s currently at around 85 per cent of his energy levels.

READ MUCH MORE NEWS  HERE  AT THE Ottawa Citizen WEBSITE