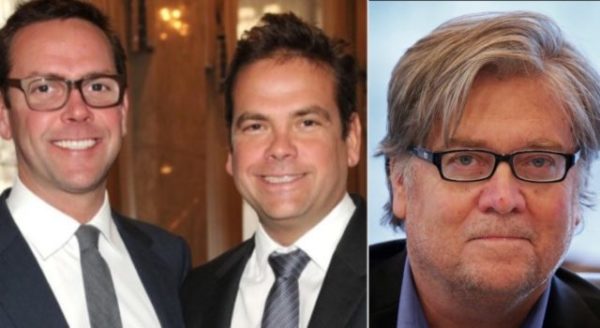 According to Axios: Steve Bannon is about to become a very big threat to the Murdoch Brothers conservative-leaning network news monopoly.

Unshaven and working from home in cargo shorts as he moves into “Bannon the Barbarian” mode, Steve Bannon is thinking bigger than Breitbart.

Axios’ Jonathan Swan hears Bannon has told friends he sees a massive opening to the right of Fox News, raising the possibility that he’s going to start a network.

Bannon’s friends are speculating about whether it will be a standalone TV network, or online streaming only.
Before his death in May, Roger Ailes had sent word to Bannon that he wanted to start a channel together. Bannon loved the idea: He believes Fox is heading in a squishy, globalist direction as the Murdoch sons assume more power.
Now he has the means, motive and opportunity: His chief financial backer, Long Island hedge fund billionaire Bob Mercer, is ready to invest big in what’s coming next, including a huge overseas expansion of Breitbart News.
On Day 1, Bannon declared he’s taking his West Wing infighting to the outside, telling Bloomberg Businessweek’s Josh Green that he’s “going to war for Trump against his opponents — on Capitol Hill, in the media, and in corporate America.”

The reality is that Bannon will go nuclear on former colleagues he calls “West Wing Democrats”: economic adviser Gary Cohn, Jared and Ivanka (“Javanka,” as he calls them) and Deputy National Security Adviser Dina Powell.

The revved-up Breitbart operation is also likely to target Speaker Ryan, as it did before Trump.

Why it matters: The country’s national political conversation is about to get even uglier, if you can imagine. It’s going to be dark, and toxic, with a fight on the right that may be more bitter and personal than hostilities between Republicans and Democrats.

Will Steve Bannon be more useful to the conservative movement on the outside? Will he use his experiences in the White House and his vast knowledge in the world of conservative media to build a media empire that could crush the Murdoch’s FOX News network? Many Americans will be wondering…Will Bannon hire Bill O’Reilly, the one man who kept Fox News at the top of the ratings for over a decade?

President Trump wished Steve Bannon well in his return to Breitbart News. Is it possible Trump knew of Bannon’s plans to build a right-leaning media empire that could take down the leftist fake news monopoly we currently see in America?

100 Percent FED UP– With the liberal sons of Rupert Murdoch now firmly at the helm of what once was a conservative-leaning alternative to leftist cable news shows like CNN, MSNBC and the mainstream media news outlets, there is a very good chance Americans are witnessing the end of a significant era where FOX News ruled the ratings and liberal-run propaganda networks only dreamed of the kind of revenue they were pulling down.

It is difficult to exaggerate the significance of Fox News’ sacking of Bill O’Reilly.

Not only was he the single most dominant public figure in America’s vast conservative media environment, his removal signals the growing power of James and Lachlan Murdoch in the world’s most powerful media empire, their father Rupert Murdoch’s 21st Century Fox.

Murdoch’s support for Trump distinguishes him from some of his children, including James, who told more than one friend of his dismay that his father was backing the Trump candidacy. James’s wife, Kathryn, backed Hillary Clinton during the campaign and has been a vocal critic of the new president on Twitter. In September Kathryn tweeted: “A vote for Trump is a vote for climate catastrophe”, while on the night of the president’s stunning election victory she wrote: “I can’t believe this is happening. I am so ashamed.”

James and Kathryn are committed environmentalists: she is on the board of the Environmental Defense Fund, which a Fox News report recently labelled a “leftwing group”, while James wrote in The Washington Post in 2009 that “conservation-minded conservatives” were “missing in the heated partisanship of today’s politics”. – Financial Times

James Murdoch’s wife works for the Clinton Climate Initiative. She is an outspoken hater of President Trump on Twitter and much of her hate is directed at his refusal to accept that man-made climate warming cooling change is settled science. Here are a few examples of the hate she spews for Donald Trump on Twitter: