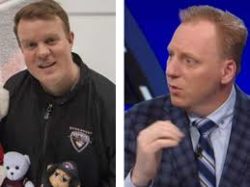 VANCOUVER (NEWS 1130) – Get ready to hear the names Brendan Batchelor and Corey Hirsch.

Bachelor tells Breakfast Television on City, after four seasons calling games for the Vancouver Giants, the NHL gig is a dream come true.

“It’s been a long process, but it’s very exciting for me to be able to do this along with Corey and we’re really looking forward to the season.”

Hirch is a former goalie with the Vancouver Canucks.

The station hits the airwaves on Labour Day.