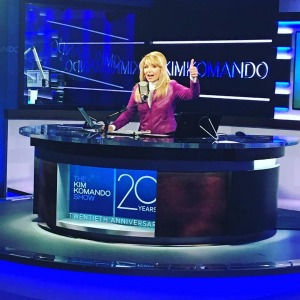 Kim Komando was nine years old when she first sat at a computer, helping her mother locate software “bugs” while she coded software. She ended up graduating from high school at age 16 and went to Arizona State University where she started helping people using computers. Kim graduated top of her class from ASU’s School of Business at 19 years of age with a Bachelor of Science degree in Computer Information Systems.

Then it was on to IBM, AT&T, and Unisys working sales. At Unisys, she sold mainframe systems, being the only woman doing so. After she closed her biggest sale, Honeywell, a Unisys system for $11 million, Kim took that commission check and founded her own company, in 1992: “The Komando Corporation.” She quit sales to focus on her column and newly developed radio show, all about computers, of course. Komando developed computer training tapes like Komputer Tutor, which she sold by infomercial. Over 150,000 tapes were sold for $80 to $120 each. She has written 12 books on computers and technology.

Over the course of 21 years, Kim Komando has certainly been a trailblazer in the radio industry. In 1991, she developed the concept and launched a new radio show about technology, being one of the very few women to host. The Kim Komando Show is now syndicated on over 400 stations nationwide and in over 177 countries on the Armed Forces Radio Network.

And Komando has evolved her show just as the radio business has evolved. Radio always needs fresh content and new revenue streams, and Komando’s show provides stations the digital assets and programming to help drive NTR, local sales, and ratings. She’s been doing this now for 21 years, and two years ago, her company WestStar MultiMedia Entertainment, moved into a $7.5 million, 24,000-square-feet state-of-the-art broadcast facility in Phoenix’s north central business district.

Kim Komando is on Radio Ink‘s 2017 Most Influential Women in Radio list, set to be released on June 19. She tells Radio Ink she is an entrepreneur but radio is what she loves to do. “We are a multimedia company. But radio was and is our foundation. Therefore, I am always selling radio. I believe in radio. I do not doubt radio’s continued reach or power. I am always selling our brand and our product.” Here is our extended interview with Kim Komando.