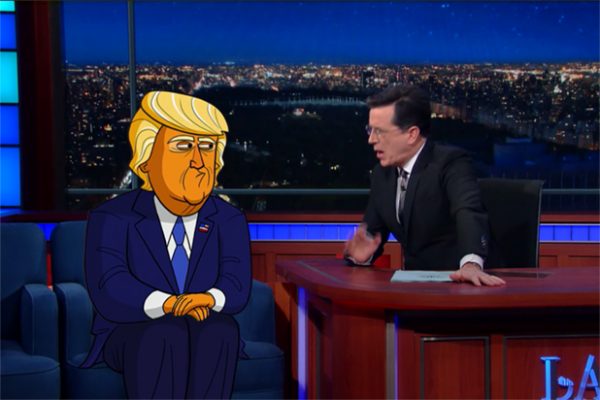 Stephen Colbert’s “Late Show” has found itself in a weird place lately — first.

If you read that sentence and thought, “Wait, what? Really?” — we can’t blame you. That’s because mere weeks ago, Colbert’s talker was struggling so much that various publications not named TheWrap wondered aloud about the possibility of “Late Late Show” host James Corden being handed the earlier hour. ‘Twas a big premature, perhaps.

So, how did the “Colbert Report” alum right his new ship? Well, the host had a lot of help from an unlikely office, and the very thing that formerly plagued Colbert’s “Late Show” is pretty much what saved it.

Early criticism about the post-Letterman era was that the variety show dove too deeply into politics, as opposed to devolving into silly games with celebrities a la Fallon, or creating shareable viral moments like Colbert’s other chief competition, Jimmy Kimmel. Here’s the thing though: Nielsen doesn’t measure YouTube clicks. Sorry, Jimmys.

Still, the Fallon one had Colbert’s number — that is, until Donald Trump became President of the United States of America.

Chief competition Fallon’s brand of fun took a bit of a hit when he had Trump on as a guest pre-election, choosing to tussle the man’s hair instead of ruffle his feathers. Hollywood — and viewers — hoped for something more from the day part’s king of joy.

Meanwhile, the openly liberal Colbert — who spent years on Comedy Central playing an over-the-top conservative character — stayed on message. He turtled to Fallon’s hare, and the perfect political climate to pass his foe came gift-wrapped.

Here’s how the Trump administration has paid off for Colbert: Inauguration week, he lost the eyeball race by just 8,000 total viewers. The following week featured reruns. Since then, Colbert hasn’t lost, and he’s projected to win this current week.