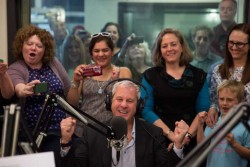 After a rescue campaign that raised $7 million-plus from listeners, KPLU-FM radio will soon be wearing new call letters — KNKX.

The jazz-blues-news station will assume its new name once the group Friends of 88.5 assumes control of the station, tentatively scheduled for August 30.

A $7 million “Save KPLU” fundraising drive earlier this year rescued the station from sale to University of Washington-owned KUOW and the elimination of its staff. More than 24,000 donations, from more than 18,000 donors, allowed purchase of the station from Pacific Lutheran University.

KNKX officially stands for “Connects,” or as the station explained it: “The community feels connected to us and we to them.” The new station will follow the format that gained it so many supporters, news and blues and National Public Radio news.

“Our listeners save something they felt a personal and emotional connection to, and told us 88.5 felt like their friends and family. We want to grow that connection and ingrain ourselves even more into the community,” said 88.5 General Manager Joey Cohn, who displayed a sleepwalker’s sureness during the grassroots drive to save the state.

Friends of 88.5 did it differently, inviting its supporters to submit names. More than 2,000 people submitted their ideas. The people running 88.5 broke it down to five top choices, met with the Friends of 88.5 board, 88.5 listeners and staff, and — yes — a marketing firm.

Friends of 88.5 is in the final stages of getting Federal Communications Commission approval for transfer of the station’s license from Pacific Lutheran University to the local non-profit.