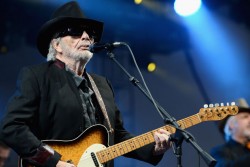 Singer had been battling pneumonia

Haggard had been battling pneumonia, and was hospitalized earlier this year.

The Tennessean reports that Haggard died in California. His health woes had led the singer to cancel a number of shows recently.

Born in Bakersfield, California, in 1937, Haggard had a colorful personal life as well as a successful music career, spending time in San Quentin State Prison following an attempted burglary.

Becoming involved in Bakersfield’s music scene, Haggard played bass in Buck Owens’ band, and played with Wynn Stewart before making his own mark in music.

The singer was perhaps best known for the 1969 song “Okie From Muskogee.” Another signature tune, “The Fightin’ Side of Me,” was released the following year.

READ THE REST OF THIS OBIT  HERE  AT TheWrap.com