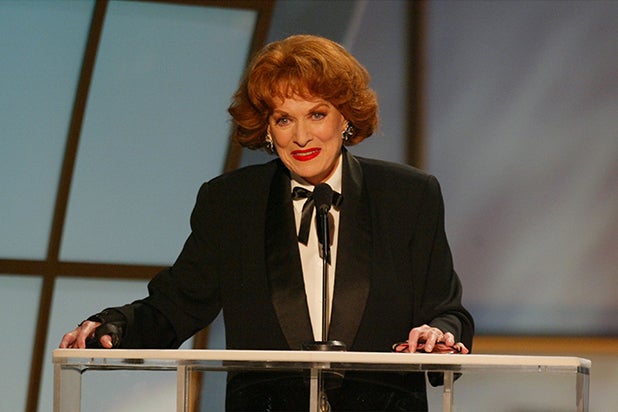 Actress Maureen O’Hara presents the award for Best Male Actor in a Television Movie or Miniseries during the 9th Annual Screen Actors Guild Awards at the Shrine Auditorium on March 9, 2003 in Los Angeles, California. (Photo by Kevin Winter/Getty Images)
.

Maureen O’Hara, known for her screen pairings with John Wayne in the films of John Ford and one of the last A-list survivors of Hollywood’s golden age, died on Saturday at home in Boise, Idaho. She was 95.

A generation after her classic-era film career, O’Hara appeared in director Chris Columbus’ 1991 John Candy film “Only the Lonely” as the mother of Candy’s character.

The gorgeous Irish actress was often described as “fiery” and was nicknamed “Big Red” both because of her signature red hair and a certain temperamental streak in her characters, exemplified by her Mary Kate Danaher in 1952 Ford classic “The Quiet Man.”

Upon seeing her beautiful red hair and green eyes, RKO execs chose to make 1945’s “The Spanish Main,” in which O’Hara was to star with Paul Henreid, in Technicolor instead of black and white.

Charles Laughton began her movie career: While she was still a teen, he viewed a screen test she had made, and he and partner Erich Pommer signed her to a seven-year contract with their company, Mayflower Films.