The Vancouver Canucks Hockey team has confirmed the passing of their longtime (40 years!) singer of the national anthem at Canuck home games, Richard Loney. 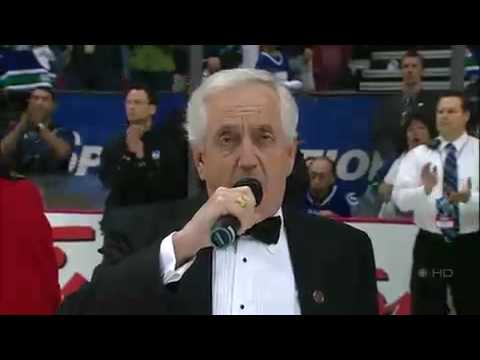 In an online statement, Linden described Loney’s voice as one-of-a-kind.

“The entire Vancouver Canucks organization is deeply saddened to learn of the passing of Richard Loney.”

Richard sang the anthem at the first Canucks NHL game in 1970, going on to sing for the team for the next 40 years. He also sang for the the Lions, Whitecaps, Giants and at Safeco Field for the Blue Jays.

“I was lucky enough to hear him sing O Canada so many times during my playing career,” said Linden. “He’s been such a big part of our team’s history and was a true icon in B.C.”

“He was such a nice man and I will miss him. Our heartfelt condolences go out to his wife Marion, and his family and friends.”