He is generally considered the father of the “Call-In” radio format after putting the telephone up to a microphone one night in 1945, and refining the technique over the next 50 years. Beginning in 1950 he ran for 39 straight years late-night on WMCA, then moved to WOR until his death Dec. 21 1996 at age 80.

Also in 1916, actor/singer Ken Curtis was born in Las Animas, Colorado.  He sang with Shep Fields Orchestra, with Tommy Dorsey, Roy Rogers & The Sons of the Pioneers before making a national breakthrough as Festus the cantankerous deputy on TV’s Gunsmoke.  He also had a running role on the series The Yellow Rose.  He died in his sleep Apr 29, 1991 at age 74.

In 1921, the first prize fight boasting a million-dollar gate was broadcast on radio from Jersey City, NJ, as Jack Dempsey knocked out George Carpentier in the fourth round for the heavyweight championship.

In 1927, actor/singer Brock Peters was born George Fisher in New York City.  Besides his signature role as the black man falsely accused of rape in the movie To Kill a Mockingbird, he had guest & supporting roles in scores of TV series, including the continuing part of Joseph Sisko on Star Trek: Deep Space Nine.    His deep resonant voice made him ideal for cartoon voiceovers, as well as stand out voice work in numerous musical recordings.  He played Darth Vader on NPR Radio.  He died of pancreatic cancer Aug 23, 2005 at age 78.

In 1932, another radio first as Franklin Delano Roosevelt made the first presidential nominating convention acceptance speech.

In 1939, The Aldrich Family debuted as the summer replacement for Jack Benny Sunday nights at 7 on NBC radio. 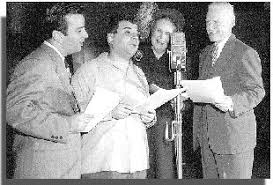 For the next 13 years the program would open to the sound of Mother Aldrich calling, “Hen-ree! Henry Aldrich!” Mrs. Aldrich was named Alice; Mr. Aldrich was Sam; Henry’s sister was Mary; Henry’s mischief-making friend was Homer Brown; and Henry’s girlfriend was Kathleen. The teenaged Henry was played delightfully by Ezra Stone (center, left) who was then already in his mid-20’s.

Also in 1939, singer Paul Williams was born in Birmingham Alabama.   He sang with the doo-wop group The Temptations on such hits as The Way You Do the Things You Do, My Girl, & Just My Imagination.  He also did the group’s choreography.in the early stages of their career.  Alcoholism & sickle cell anemia forced his early retirement, and he apparently committeed suicide Aug 17, 1973 at age 34.

In 1941, the lighthearted comedy-mystery The Adventures of the Thin Man, based on the Nick & Nora Charles movie series of the same name, debuted on NBC radio. 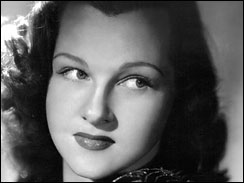 In 1942, vocalist Jo Stafford joined Tommy Dorsey and his orchestra for Manhattan Serenade, which was recorded for Victor Records. The recording session, you may have guessed, took place in Manhattan.

In 1943, the No. 1 Billboard Pop Hit was “Comin’ in on a Wing and a Prayer,” by The Song Spinners. Recorded during one of the several militant musicians unions’ recording bans it was virtually a capella.

In 1945, The Marlin Hurt & Beulah Show made its debut on CBS radio.  Marlin Hurt had first introduced his Beulah character (a black maid) while a cast member of the Fibber McGee & Molly Show.

In 1946, CBS Radio signed the Old Redhead, Arthur Godfrey to do a weekly nighttime show. Already established as a star of daytime radio, Godfrey was soon hosting one of radio’s (and soon thereafter television’s) top shows, Arthur Godfrey’s Talent Scouts.

In 1949, one of New York radio’s top sportscasters made his TV debut on  “Red Barber‘s Clubhouse,” first on CBS & later NBC.

In 1955, ABC Television premiered the long-running Lawrence Welk Show, although initially under the title Dodge Dancing Party.  Previously an LA local show only, it ran another 27 years, on the network & later in syndication.

In 1956, Elvis Presley was in New York to record Hound Dog and Don’t Be Cruel for his new record label home, RCA Victor. It took 31 takes of Hound Dog before producer Steve Sholes was happy. It marked the first time Elvis had the Jordanaires as background singers. The two-sided hit “Don’t Be Cruel/Hound Dog” topped Billboard’s Hot 100 for 11 weeks, setting a record in the rock era that stood until 1992. 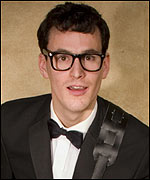 In 1958, Connie Francis was on ABC-TV’s American Bandstand, performing “Who’s Sorry Now” & “I’m Sorry I Made You Cry”

In 1961, CBS-TV’s Ed Sullivan Show featured Louis Armstrong and his combo with “Sleepy Time Down South,” “Up A Lazy River,” “Ole Miss” & “Bill Bailey.” Teresa Brewer also sang, there was a magician and his assistant performing illusions, while the comedy team of Rowan and Martin and monologist Myron Cohen evoked laughs and chuckles live, both in the studio and from the home audience.

Also in 1961, Elvis Presley was in Nashville to record “Follow That Dream,” “Angel”, “I’m Not the Marrying Kind” and “What A Wonderful Life.”  Floyd Cramer played piano for the session, D. J. Fontana was on drums while Boots Randolph played sax.

In 1962, Seattle’s Jimi Hendrix was honourably discharged from the 101st Airborne Paratroopers; he’d broken an ankle on his 26th and final parachute jump.

In 1963, the No. 1 Billboard Pop Hit was “Easier Said Than Done,” by The Essex. The members of the group were all U.S. Marines, including lead singer Anita Humes. 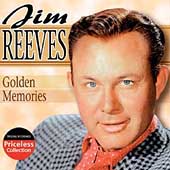 In 1964, country/pop singer Jim Reeves held what turned out to be his final recording session, at Studio B in Nashville. The last song he recorded was Don Gibson`s “Can`t Stop Loving You.”  Less than a month later he died in a plane crash.

In 1965, in Hollywood, Dean Martin recorded his next Top Ten single for the Reprise label, “Houston.”

In 1966, “Strangers in the Night” by Frank Sinatra topped the charts and stayed there for just the one week.

Also in 1966, American Bandstand featured The Vogues performing “The Land of Milk and Honey”” & “”Magic Town,” while Ketty Lester did her signature version of “”Love Letters.”

In 1971, Queen appeared at Surrey College in England. This was the group’s first gig with the line-up of Freddie Mercury, Brian May, Roger Taylor and John Deacon.

Still in 1973, actor George Macready, the man with the menace in his voice, who combined 200 TV appearances with an extensive big screen career, who played Martin Peyton in the TV series Peyton Place, died of emphysema at age 73.

In 1976, in Anaheim Brian Wilson joined the Beach Boys on stage for the first time in 12 years. The next night the show was taped for an NBC TV special.

In 1977, Bill Conti went to No.1 on the Billboard singles chart with ‘Gonna Fly Now’ (Theme from Rocky).

In 1980, Bob Weir and Mickey Hart of the Grateful Dead (and the band’s manager) were arrested on suspicion of inciting a riot at the San Diego Sports Arena, after they allegedly interfered in the drug-related arrest of one of their fans.

In 1984, the No. 1 Billboard Pop Hit was “When Doves Cry,” by Prince. The song was the first single released from his “Purple Rain” LP and his biggest hit, selling more than 2 million copies and topping the pop chart for five weeks.

Also in 1984, Epic Records set a record as two million copies of the Jacksons‘ new album, Victory, were shipped to stores. It was the first time that such a large initial shipment had been sent to retailers. The LP arrived just days before Michael and his brothers started their hugely successful Victory Tour.

In 1986, Bob Dylan joined the Grateful Dead onstage in Akron Ohio for a performance of his  “Don’t Think Twice, It’s All Right.”

In 1988, Michael Jackson became the first artist to have five number one singles from one album when Dirty Diana went to the top of the Billboard Hot 100. The other four chart-toppers from Bad were I Just Can’t Stop Loving You, Bad, The Way You Make Me Feel and Man in the Mirror.

Also in 1990, representatives of the Italian Catholic Church announced that they would attempt to halt Madonna‘s concerts in Rome because of her alleged inappropiate use of crucifixes and sacred symbols.

In 1991, actress Lee Remick, who started in early TV on the likes of Studio One, Robert Montgomery Presents, Playhouse 90 & Hallmark Hall of Fame, lost her battle with liver & kidney cancer at age 55.

Also in 1991, Guns N’ Roses lead singer Axl Rose sparked a riot in a St. Louis suburb by jumping off the stage and attacking a fan who was videotaping the concert. 60 people were hurt, 15 fans were arrested and the venue was wrecked.

In 1992, Mick Jagger’s daughter Jade gave birth to a daughter. She was the first grandchild for the 48-year-old Rolling Stone.

In 1993, actor Fred Gwynne, who starred in two TV sitcoms, Car 54 Where are You & The Munsters, died of pancreatic cancer at age 66. 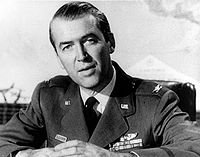 In 1997, actor James Stewart died of cardiac arrest at age 89.  The major movie star was a frequent guest on radio variety & dramatic shows, and starred in NBC Radio’s 1953 western series The Six Shooter.  On TV he headlined two series, The Jimmy Stewart Show & Hawkins, and guested on scores of other programs, both in & (more often) out of character.

In 1998, the Cable News Network (CNN) retracted their apparently erroneous story that U.S. commandos had used nerve gas to kill American defectors during the Vietnam War.

In 1999, latin pop star Enrique Iglesias (below) gave a free public performance in front of the Lincoln Center Plaza in New York. 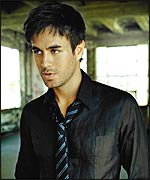 In 2001, Yoko Ono was in Liverpool as the local airport was renamed after her late husbandJohn Lennon.

In 2002, Hal Simms, for decades one of the most frequently heard announcers on CBS television, died in a Massachusetts nursing home at age 83. From the early 1950’s until 1992, Simms was a familiar offstage presence on New York-based shows like ”Beat the Clock,” “To Tell the Truth,” ”The Guiding Light” and ”The Frank Sinatra Show.” His voice was heard proclaiming ”CBS presents this program in color,” countless times, and he often filled in on news and sports.

In 2005, MTV and VH1 aired the eight hours of the Live 8 concerts. The performances, featuring artists U2, Coldplay, Madonna, Dave Matthews Band, Jay-Z and Destiny’s Child among many others, were held in eight cities to raise awareness of poverty in Africa. 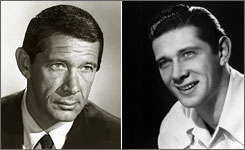 Also in 2006, Elton John was among the artists performing in London at a EuroPride Day concert called The Show. The event was part of the city’s gay-pride festivities.

In 2007, lyricist Hy Zaret, who wrote the words for the song Unchained Melody, died at his home in Westport, Connecticut, aged 99. The song (which does not include the word “unchained”), has been recorded more than 300 times. Zaret co-wrote the song with film composer Alex North for the 1955 prison film Unchained. The Righteous Brothers’ 1965 version was produced by Phil Spector.

In 2010, Maroon 5 was on NBC’s Today Show as part of the program’s summer concert series. The band performed “Misery,” the lead single from their album “Hands All Over.”

In 2012, journalist/broadcast executive Julian Goodman, the president of NBC from 1965-’74, who helped make Huntley & Brinkley the #1 news anchor team, and gave Johnny Carson his first $1-million contract, died due to kidney failure at age 90.

Also in 2012, Canadian baritone Mike Douglas, who sang with The Diamonds from 1958 to ’72, died from injuries suffered in a Florida car crash at age 78.

Keyboardist Roy Bittan of the E Street Band is 66.

Bassist Dave Parsons of Bush is 50.

Actress Amy Weber (Port Charles, Son of the Beach) is 45.

Actor Owain Yeoman (The Mentalist) is 37.

Actress Margot Robbie (Pan Am) is 25.

Actor Jackson Odell (The Goldbergs) is 18.