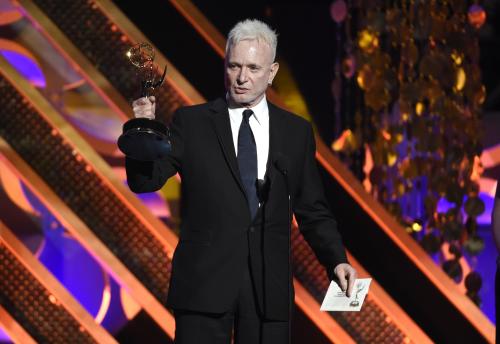 In this April 26, 2015, file photo, Anthony Geary accepts the award for outstanding lead actor in a drama series for “General Hospital,” at the 42nd annual Daytime Emmy Awards in Burbank, Calif. After 37 years, Geary finishes his role as Luke Spencer on ABC’s “General Hospital” on Monday, July 27, 2015. (Photo by Chris Pizzello/Invision/AP, File)

NEW YORK (AP) — Anthony Geary, whose character Luke Spencer’s marriage to Laura in 1981 on “General Hospital” was the biggest moment in daytime television history, will appear in his final episode next month.

ABC announced in May that Geary decided to leave the show after nearly three decades, saying his character would be written out of the series later this summer. His last appearance in the role will air on July 27, the network announced Monday.

More than 30 million people tuned in to watch Luke marry Laura, considered a storybook event despite a backstory of Laura falling in love with her rapist.

Actress Genie Francis, who played Laura but hasn’t been on “General Hospital” since 2013, has returned to participate in the story of Luke’s exit. They’ve teamed up to save their son Lucky, played by Jonathan Jackson. They believe Lucky has been kidnapped. Jackson, who left the show in 2011, will also briefly reprise his role to help usher out the character of Luke.

Geary, 68, began playing Luke in 1978. He said in a statement that he originally signed on for a 13-week stint. He said except for an eight-year hiatus in the 1980s, “Luke Spencer has been my alter ego ever since. I’d like to thank ABC, my producers and the GH audience for a long and exciting ride.”

Geary has received a record eight Daytime Emmy Awards for his work as Luke Spencer.

“General Hospital” marked its 52nd anniversary in April and is the only remaining soap opera on ABC. It’s the longest-running daytime drama on television.