Samuel F.B. Morse tapped out the message “What hath God wrought” in Morse Code. The development inaugurated North America’s telegraph industry. The message was sent from Washington, DC to Baltimore.

In 1876, the band of the North West Mounted Police, the forerunner of the RCMP, made its debut in Swan River, Manitoba. The instruments were purchased by the 20 band members themselves and shipped from Winnipeg by dog sled.

In 1901, at Hamilton Ontario, Clementina Fessenden originated a public holiday called Victoria Day to honour the Empire by celebrating the Queen’s birthday. A schoolteacher, she was the mother of Canadian radio pioneer Reginald Fessenden.

In 1935, the 9-month old Mutual Broadcasting System aired its first live event–the first-ever night baseball game featuring the Cincinnati Reds and Philadelphia Phillies. Mutual would be the radio home of the World Series for the next 21 years.

In 1938, Art Kassel‘s orchestra recorded a song for Bluebird Records that may not have been a smash hit, but had a title to die for: So You Left Me for the Leader of a Swing Band.

In 1940, with her country Holland occupied by German troops, Queen Wilhelmina spoke from London on BBC Radio.

In 1949, radio station CHUB 1570 became “The Hub City” of Nanaimo’s first full service broadcaster.  On its first day on the air it aired live coverage of the Empire Day Parade.  CHUB’s studios were in the Malaspina Hotel.  Power was 250 watts. Its broadcast day was 6:25 am-11 pm daily and until midnight Saturdays.

In 1953, a previously unknown actor, Rod Steiger, starred in “Marty” on TV’s Goodyear Playhouse. Paddy Chayefsky wrote the original TV play and then adapted it for the Oscar-winning film.

In 1960, country singer Ferlin Husky was in Nashville to record the second huge hit of his career (after “Gone”), “Wings of a Dove.”

In 1963, Elmore James, one of the most influential urban blues guitarists, died of a heart attack in Chicago at age 45. James’ slide-guitar technique was copied by many rock musicians, including Eric Clapton, Duane Allman and Brian Jones. His best-known recording is “Dust My Broom.”

Also in 1963, The Beatles recorded the first program of their own BBC radio series, “Pop Go the Beatles”. The theme song was a version of “Pop Goes the Weasel”. 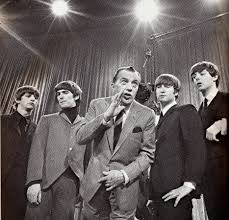 In 1964, on CBS TV’s “Ed Sullivan Show,” a taped Beatles performance was aired. The Beatles performed “You Can’t Do That” from the set of “A Hard Day’s Night.” Appearing live on the show were Liza Minnelli, Duke Ellington and UK comedianProfessor Backwards.

In 1966, Captain Beefheart appeared at the Whisky a Go Go in West Hollywood.  His opening acts were Buffalo Springfield and The Doors, whose careers didn’t take off until the following year.

In 1967, the Jimi Hendrix Experience wrapped up their first tour of Europe with a concert in Stockholm.

In 1968, CBC/Radio-Canada started building a new Montreal headquarters called Maison de Radio-Canada, to be finished by April of 1972.

Also in 1968, The Rolling Stones released “Jumpin’ Jack Flash” in the UK. It was issued in North America a week later.

In 1969, child actress Mitzi Green, who as an adult was featured on the early TV sitcom So This is Hollywood, and made personal appearances on the Ed Wynn and Ed Sullivan Shows, died of cancer at age 48.

Also in 1969, Mick Jagger and Marianne Faithfull were arrested for marijuana possession at their home in London.

Still in 1969, the Beatles hit number one with Get Back. The song stayed parked at the top of the hit heap for five weeks.

Again in 1969, Canada’s Guess Who made their U.S. television debut on ABC’s “American Bandstand,” performing their breakthrough hits “These Eyes” and “Laughing.”

In 1970, Peter Green played his last show with the band he founded, Fleetwood Mac, at the Bath Festival in England, before joining a religious cult.

In 1974, bandleader and composer Duke Ellington died of lung cancer at age 75. Considered by many the greatest jazz musician ever, Ellington’s career as a bandleader lasted for 50 years. He wrote such standards as “Mood Indigo,” “I Got It Bad and That Ain’t Good” and “Satin Doll.”

Also in 1974, after a nine year run, the last Dean Martin Show was seen on NBC. Dean’s group of lovelies, The Golddiggers, returned to bid farewell in the show that had been seen in a variety of formats on Thursday and, later, on Friday evenings.

In 1978, the debut album by the heavy metal band Van Halen was certified gold in the U-S. It eventually sold more than two-million copies.

In 1980, the three members of Genesis, Phil Collins, Mike Rutherford and Tony Banks, gave fans a thrill by manning the box office and selling tickets to their upcoming show at the Roxy in Los Angeles.

In 1981, actor/comedian/radio-TV host & frequent guest George Jessel, who often performed with the nickname “America’s toastmaster general,” died after a heart attack at age 83.

In 1982, The Grateful Dead, Jefferson Starship, Boz Scaggs, and Country Joe and the Fish played a benefit concert for Vietnam vets at the Moscone Center in San Francisco.

In 1984, the No. 1 Billboard Pop Hit was “Let’s Hear It for the Boy,” by Deniece Williams. The song was featured in the film “Footloose.” Williams was a member of Stevie Wonder’s backup group, Wonderlove, from 1972-75

In 1986, Whitney Houston‘s Greatest Love of All was starting week number two of a three-week stay at #1. 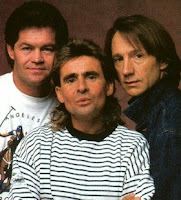 Also in 1986, Davy Jones, Mickey Dolenz, and Peter Tork reunited as The Monkees. They kicked off their reunion tour in New York’s Catskills Mountains.

In 1987, English comic actress Hermione Gingold, a frequent guest on the couch of Jack Paar’s NBC TV shows, died of pneumonia at age 89.

In 1988, Jon Bon Jovi joined Bryan Adams on stage as Adams gave an impromptu performance at a Vancouver nightclub. All 900 tickets for Adams’s show, which wasn’t announced until that day, were snapped up within seven minutes. Adams donated the 20-thousand dollars raised to Vancouver Children’s Hospital for treatment of young cancer patients.

In 1989, “Weird Al” Yankovic recorded “Generic Blues,” “Biggest Ball of Twine in Minnesota,” “Hot Rocks Polka,” “Attack of the Radioactive Hamsters,” and “Spam.” The five tracks all appeared on the soundtrack to his film “UHF.”

In 1991, Gene Clark, a founding member of the Byrds, died of natural causes at his home in Sherman Oaks, California. Clark had a history of alcohol and drug abuse. He was either 49, as noted in reference books, or 46, as claimed by his manager. Clark, a singer-guitarist-songwriter, performed on the Byrds’ hits “Mr. Tambourine Man” and “Turn! Turn! Turn!” but left the pioneer folk-rock group in 1966. The split was due to differences with Byrds’ leader Roger McGuinn — and to Clark’s fear of flying, which made touring difficult.

In 1993, the final episode of the sitcom “Designing Women” was aired on CBS-TV.

In 1994, fiddler King Ganam, one of the most popular western musicians on Canadian television in the 1950’s, died in Carlsbad, California at age 78. Ganam was one of the stars of “Country Hoedown” on CBC T-V from 1956 to ’59, and host of “The King Ganam Show” on C-T-V in 1961. He had earlier performed regularly on C-B-C Radio. At the peak of his fame, Ganam was reported to be receiving 700 fan letters a week.

Also on this date in 1994, Poison lead singer Bret Michaels suffered multiple broken bones and other injuries when he crashed his Ferrari into a light pole in Los Angeles. Michaels wasn’t charged, but had to pay for the pole.

Also in 1997, actor Edward Mulhare, who was the love interest opposite Hope Lange in the late ’60’s TV series The Ghost and Mrs. Muir, and co-starred in the action series Knight Rider, died of lung cancer at age 74.

Again in 1997, the Tragically Hip‘s “Live Between Us” was released. It became the third straight Hip album to debut at Number One on the Canadian music chart.

Still in 1997, The Spice Girls went to No.1 on the Billboard album chart with ‘Spice’, making them only the third all girl group to do so after The Supremes and The Go-Go’s.

In 1999, David Bowie wrote and recorded the song “What’s Really Happening” during a live Webcast. The song appeared on the album “Hours.”

In 2000, a New York Judge told Pretenders singer Chrissie Hynde that if she wanted her March arrest for protesting the sale of leather goods in a Gap store dismissed, she’d better keep her nose clean for the next six months.

Also in 2000, Andrea and Sharon Corr from The Corrs both collapsed in the mid-day sun while shooting their new video in Califormia’s Mojave Desert. The pair were treated in hospital for heat exhaustion and were back on the set within 24 hours.

In 2003, Paul McCartney made his first ever live performance in Russia when he appeared in-front of 20,000 fans in Red Square.

In 2004, Madonna kicked off the North American leg of her Re-invention World Tour by playing three sold out nights at the Los Angeles Forum. The tour became the top grossing of the year, with ticket sales of nearly $125 million, with over 900,000 fans attending the 60 date tour.

In 2006, Taylor Hicks beat out Katherine McPhee to win the fifth season of “American Idol.”

Also in 2006, Elton John accepted $188,000 in libel damages from London’s Daily Mail newspaper over their allegations that he had asked guests not to approach him at a charity ball.

In 2008, comedian Dick Martin, a co-star with Dan Rowan on NBC TV’s iconic “Rowan and Martin’s Laugh-In”, died of respiratory problems at age 86.  Early in his career he’d written for radio’s “Duffy’s Tavern.”

Also in 2008, Rush played their first Winnipeg concert in 26 years. Ticket sales raised funds to help finance the building of the Canadian Museum for Human Rights in that city. Rush also sold special T-shirts on Canadian dates to raise a promised $100,000 for the project.

In 2009, Billy Joel was being sued by his former drummer for hundreds of thousands of dollars in unpaid royalties. Liberty Devitto, claimed that Joel hadn’t paid him proper royalties for 10 years of his work.

In 2010, the Bee Gees’ Robin Gibb had a “meltdown” at London’s Heathrow Airport as he hurled expletives at the British Airways staff and refused to board a plane bound for Los Angeles after he was randomly selected for an extra security check.

Knowlton Nash, the longtime CBC News correspondent & anchor of ‘The National’ (1978-88), died at age 86. He had been suffering with Parkinson’s Disease for some time.

Singer Patty Labelle (Dancing With the Stars) is 71.

Guitarist Rich Robinson of The Black Crowes is 46.

Writer/producer Greg Berlanti (Everwood, Arrow, The Mysteries of Laura) is 43.

Actor Bryan Greenberg (How to Make it In America, Bessie, October Road, One Tree Hill) is 37.

Actor Billy L. Sullivan (Something So Right) is 36.