actor/dancer Buddy Ebsen was born Christian Rudolph Ebsen in Belleville Illinois.  After co-starring as a dancer with child star Shirley Temple on the big screen in the 30’s, Ebsen had an amazing TV career. He starred in three very different series (Northwest Passage, Beverly Hillbillies, Barnaby Jones) and was the hero’s pal in half-a-dozen Davey Crockett TV features.  As well he guest starred in scores of other series.  He died of complications from pneumonia July 6, 2003 at age 95.

In 1912, singer Herbert Mills of The Mills Brothers was born in Piqua Ohio. Their many hits include Paper Doll, You Always Hurt the One You Love, Glow-Worm & Cab Driver.  He died Apr 12, 1989, just days after his 77th birthday. In 1939, Motown hitmaker Marvin Gaye was born in Washington, D-C. He’s best remembered for his 1969 chart-topper “I Heard It Through the Grapevine,” duets with Tammi Terrell his landmark 1971 album “What’s Going On.” Marvin Gaye was shot to death by his father during a 1984 domestic dispute.

In 1942, Glenn Miller and his orchestra recorded “American Patrol” for RCA Victor records, with future bandleader Billy May on trumpet. The jitterbug tune became one of Miller’s most requested hits.

In 1946, in New York City, Perry Como recorded the ballad that would prove to be his third #1 single, “Surrender.”

In 1947, The Big Story (dramas based on newspaper reporting) was first heard on NBC radio. It stayed on the air for eight years.

In 1953, actress Debralee Scott (below) was born in Elizabeth New Jersey. Her deadpan, plaintive appearance played for laughs won hearts on each of the 4 TV series in which she had a supporting role: Angie, Welcome Home Kotter, Sons & Daughters, and Mary Hartman Mary Hartman.  She fell into a coma & died Apr 5, 2005 just days after her 52nd birthday. 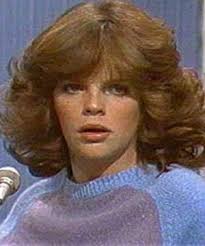 In 1955, Elvis Presley, (with Scotty Moore and Bill Black), Slim Whitman, Hoot and Curley,Johnny Horton, Tibby Edwards and Floyd Cramer all appeared on the Louisiana Hayrideradio show from Shreveport, Louisiana, which was simulcast on KWKH Television.

In 1956, two very successful & long-running daytime dramas premiered on CBS TV.  The Edge of Night ran for more than 28 years, while As the World Turns continued for more than 44 years.

Also in 1956, in Memphis, Johnny Cash recorded his first #1 hit “I Walk The Line.” The self-penned single went on to sell more than 2 million copies for Sun Records.

In 1957, Elvis Presley played two concerts at Toronto’s Maple Leaf Gardens. They were two of only four shows Elvis ever performed outside the U-S — the others being the same year in Ottawa and Vancouver. 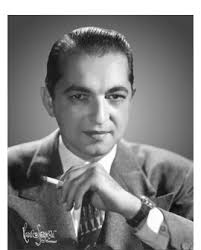 In 1960, the No. 1 Billboard Pop Hit was “Theme from `A Summer Place” by Canadian-born Percy Faith. The song was the most successful instrumental single of the rock era, staying at No. 1 for nine weeks. Billboard also ranked the song the top single of 1960.

Also in 1960, the National Association of Recording Merchandisers in the U-S presented its first awards. The top selling artists were Elvis Presley and Connie Francis.

In 1961, the Easter Sunday edition of CBS-TV’s Ed Sullivan Show featured Charlton Heston in a dramatic biblical reading; pianist Roger Williamsplayed “Abide with Me” and an “I Love You Truly”/”Sweethearts” medley. Soprano Leontyne Price sang the “Lord’s Prayer”, while Anita Bryant offered a medley of Spring favorites. 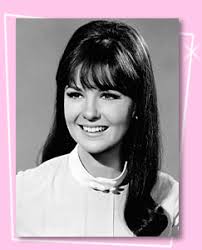 In 1962, the No. 1 Billboard Pop Hit was “Johnny Angel” by Shelley Fabares. Fabares performed the song on “The Donna Reed Show,” in which she played the daughter Mary Stone. Two decades later she would be the love interest on Coach.

In 1964, Brian Wilson of The Beach Boys produced the instrumental track for the group’s first #1 hit “I Get Around.” The vocal track was added a week later.

Also in 1964, Jerry Wallace was in Hollywood to record one of his signature songs, “In the Misty Moonlight.”

In 1965, British rockers Freddie & the Dreamers recorded “Do The Freddie” which reached the Top Twenty in the US.

In 1966, a terrific pop concert for charity featuring Jan & Dean, Sonny & Cher, the Mamas & the Papas, the Turtles, Otis Redding, Donovan and Bob Lind attracted thousands to the Hollywood Bowl in Los Angeles.

Also this day in 1966, Herb Alpert’s Tijuana Brass scored an amazing first as they became the first artists to have four LP’s at the same time in the Billboard album Top 10!

Also in 1967, Steve Winwood left the Spencer Davis Group to form the band Traffic. The other founding  members were Jim Capaldi, Chris Wood and Dave Mason.

In 1968, The Jimi Hendrix Experience, a trio that included Noel Redding and Mitch Mitchell, performed at the Paul Sauvé Arena in suburban Montreal. There were reports that Hendrix was not impressed with the acoustics of the hockey arena.

In 1970, at EMI’s Abbey Road Studios in London Phil Spector completed final editing and mixing for The Beatles‘ “Let It Be” album.  When Paul McCartney heard the finished product he didn’t like the female backup voices on “The Long & Winding Road” and didn’t want it released. 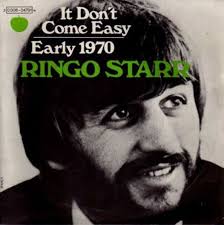 In 1971, Ringo Starr‘s first solo single, “It Don’t Come Easy,” was released. Produced by George Harrison, it peaked at #4 on the Billboard Hot 100.

In 1974, the 46th Annual Academy Awards saw 7 Oscars go to the film of the year, The Sting.  Best Music/Song was The Way We Were — Marvin Hamlisch (music), Alan and Marilyn Bergman (lyrics) from the movie of the same name.

In 1976, versatile supporting actor Ray Teal died at age 74.  In a 40 year film-&-TV career he is best remembered as the no-nonsense Sheriff Roy Coffee in the longrunning NBC western “Bonanza.”

In 1977, the restored Orpheum Theatre in Vancouver was opened as a civic concert hall and permanent home of the Vancouver Symphony Orchestra. The Orpheum had opened in 1927 as a vaudeville hall but was used mainly as a movie theatre. It originated several radio network shows in the 1940’s (Nabob Harmony House, etc.)

In 1978, J.R. Ewing and the clan arrived at Southfork, when Dallas was seen for the first time — on CBS-TV. It was originally set for a five-week run, but stayed in prime time for 13 years. 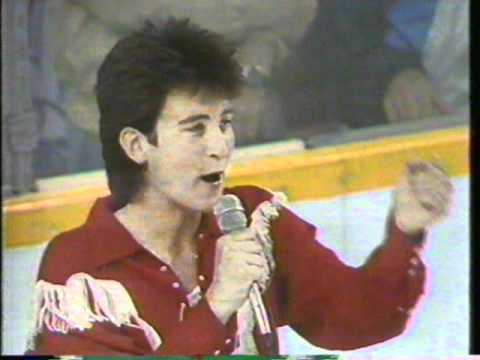 In 1987, Alberta-born country rocker k d lang made her California debut at The Roxy nightclub in Los Angeles. The engagement came as lang’s ”Angel With a Lariat” began its climb up the Billboard country chart.

Still in 1987, U2 kicked off their 29-date North American Joshua Tree tour at the Arizona State Activity Centre. During the concert, Bono introduced a version of “Helter Skelter” by announcing “This is a song Charles Manson stole from the Beatles. We’re stealing it back.”

In 1992, singer Paula Kelly (pictured, center) whose career started with The Modernaires & the Glenn Miller Orchestra, died just 4 days short of her 73rd birthday.  Her many hit recordings with the Miller band include Chatanooga Choo Choo, Kalamazoo, I Know Why and Elmer’s Tune.

Also in 1992, country singer Wynonna Judd hit the stage for the first time by herself. It was at ABC-TV’s American Music Awards, and she wowed the audience with “She Is His Only Need”. A few months earlier her mother Naomi had departed their Grammy-winning duo because of a liver disease.

In 1993, at 5:30 a.m., the Hamilton radio station known as Oldies 1150 resumed using the legendary call letters CKOC.  Management had faced strong listener opposition after changing the calls the year previous to CKMO. In 1994, actress/consumer reporter Betty Furness who gained fame doing on-camera commercials for Westinghouse in the early days of TV, lost her battle with stomach cancer at age 78.

In 1995, Julius Hemphill, an influential saxophonist and composer who helped found the World Saxophone Quartet, died in New York of complications from diabetes. He was 57.

In 1996, singer and guitarist, Guitar Gabriel, who was born Robert Lewis Jones, died at the age of 71. 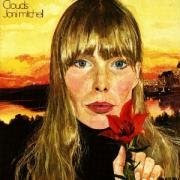 In 1997, Canadian-born folksinger/songwriter Joni Mitchell was reunited with Kilauren Gibb, the daughter she had given up for adoption 32 years before.

In 1998, Rob Pilatus, half of the dreadlocked lip-synching pop act Milli Vanilli, was found dead in a Frankfurt, Germany, hotel room. According to Germany’s Bild am Sonntag newspaper, Pilatus was alone and consuming alcohol and pills when he died.

In 1999, as Trisha Yearwood made a visit to Sesame Street, the Country Music Association female vocalist of the year got  to rub shoulders with a major childhood influence. “As a child,” she explained, “Grover was my hero. To finally get to meet my childhood hero and have an opportunity to perform with him is something I will never forget.”

Also in 1999, the Black Crowes performed in Knoxville, Tennessee. One of the concergoers later sued the band for $385,000 in a claim that he had suffered significant hearing loss at the show

In 2001, singer Mariah Carey signed a five-album deal with Virgin Records said to be worth a record 23.5 million dollars (U-S) per album.

Also in 2002, Lee Anderson Minnelli sued her stepdaughter Liza Minnelli for elder abuse and breach of contract. The claim was filed based on the will of Vincente Minnelli.

Also in 2003, dozens of fans walked out of a Pearl Jam show in Denver after singer Eddie Vedder impaled a mask of President George W. Bush with a microphone stand.

In 2005, Kanye West had to abandon a CD signing appearance in Fresno, California, after a fight broke out between a fan and a security guard.

In 2006, Gnarls Barkley started an eight-week run at No.1 on the British singles chart with ‘Crazy.’ The American duo made chart history by becoming the first act ever to reach No.1 through computer downloads only.

In 2007, Canada’s MuchMusic cable network aired Behind The Pain, a documentary chronicling Three Days Grace singer Adam Gontier’s battle with addiction to painkillers. Said Gontier “the whole message behind it is that there is hope.”

In 2009, alto saxophonist/flutist Bud Shank died of pulmonary failure at age 82. He had been a key member of the 1950’s West Coast jazz scene.

In 2010, two men received minor injuries and a third suffered a broken leg when part of the stage being set up for a concert by Elton John at the Chichen Itza ruins in Mexico collapsed during construction.

In 2011, Sir Elton John appeared on NBC TV’s Saturday Night Live for the first time in 19 years. He was both host and musical guest, along with Leon Russell, his collaborator on the 2010 album “The Union.”

Also in 2011, in Toronto, Robbie Robertson, an original member of The Band, was inducted into the Canadian Songwriters Hall of Fame.

In 2013, puppeteer Jane Henson, who with her future husband Jim Henson was instrumental in bringing the Muppets to life in the 1950s on a TV station in Washington D.C., died at age 78 at her home in Greenwich, Conn., after a long battle with cancer.

Also in 2013, a grand piano used in the Motown Records studios was fully restored and put on display at a Detroit museum dedicated to the legendary record label. Sir Paul McCartney helped fund the restoration of the 1877 Steinway, which was originally in Motown’s Studio B. and was used to create hits for names including Marvin Gaye, Stevie Wonder and Edwin Starr.

Drummer Dave Robinson of The Cars is 62.

Actress Amelia Marshall (Guiding Light, All My Children) is 57.

Singer Keren Woodward of Bananarama is 54.

Actor Clark Gregg (Agents of S.H.I.E.L.D, The New Adventures of Old Christine) is 53.

Actor Aiden Turner (All My Children) is 38.

Actor Deon Richmond (Sister Sister, Getting By, The Cosby Show) is 37.

Keyboardist Jesse Carmichael of Maroon 5 is 36.

1950
If I Knew You Were Comin’ I’d’ve Baked a Cake – Eileen Barton
Dearie – The Guy Lombardo Orchestra (vocal: Kenny Gardner Trio)
Music, Music, Music – Teresa Brewer
Take Me in Your Arms and Hold Me – Eddy Arnold

1986
Rock Me Amadeus – Falco
R.O.C.K. in the U.S.A. – John Cougar Mellencamp
Kiss – Prince & The Revolution
Don’t Underestimate My Love for You – Lee Greenwood