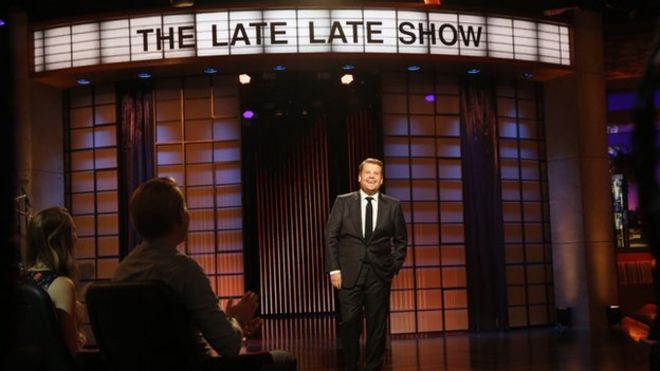 Corden introduced himself to the audience, saying he was ‘shocked’ by his new job

James Corden’s debut on TV’s The Late, Late Show has been praised in the US.

Fans and critics were impressed by the 36-year-old host, calling the talk show “inspired lunacy” and “a winner”.

Corden, a relative unknown in the US, was joined by Hollywood stars Tom Hanks and Mila Kunis for the first show in LA on Monday.

He introduced himself to the audience, saying: “However shocked you are that I am doing this job, you will never be as shocked as I am.”

A raft of A-listers also joined forces to record videos for his first show.

“I’m sure lots of people are wondering how I ended up in this seat, and I include myself in that too, but rather than tell you we thought we would show you this,” Corden said, introducing a Charlie And The Chocolate Factory-themed sketch.

It included appearances from Simon Cowell, Oscar winner Eddie Redmayne and comedian Chris Rock all devastated or furious after opening chocolate bars without the golden ticket inside, before Corden finds the winning ticket in the street.

Corden, who was not widely known in the US before landing the high profile job on CBS, was praised for his likeability.

Writing in The Hollywood Reporter, Tim Goodman said: “As first nights go, this was a winner for Corden.”

He praised the star as “youthful and engaging” and compared him to Tonight Show host Jimmy Fallon. 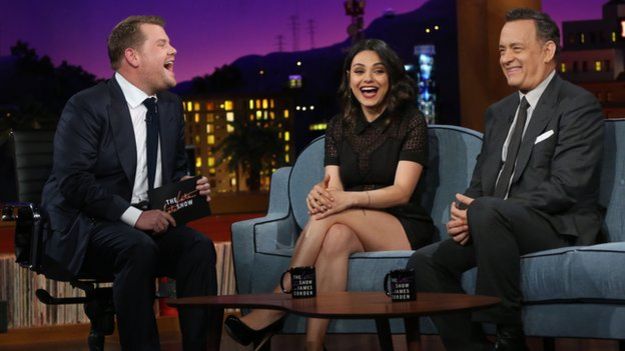 “Corden doesn’t put a layer of cool between him and the viewer (or his guests) – he’s as affable and sincere as Fallon with just a little less goofiness. It’s a welcome trait, one that should put guests at ease,” he said.