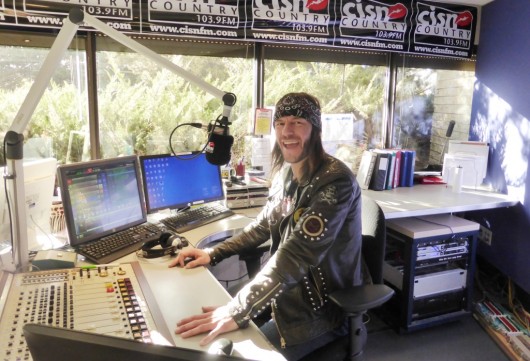 Clayton Bellamy says he feels weird when he hears his own song on the radio – especially when he’s the DJ on the air at the time.

Who would’ve guessed it would turn out to be CISN Country that takes one of the biggest risks in Edmonton radio history? They’ve put a recording artist with no broadcasting experience on the air in prime time drive time. It’s never been done in this market before.

Bellamy – one third of the Road Hammers, whose song I’ve Been Everywhere is currently on high rotation on CISN – has in the last two years taken to the 2-7 pm “Drive Home” slot like a duck to water. He’s not cruising solo. Bellamy’s on-air partner Chelsea Bird is a schooled broadcaster “who keeps me out of the ditches.”

“I’ve always been a little left of centre. They were taking a bit of a chance on me,” Bellamy admits in a recent interview at the CISN studios. Long-haired, leathered and be-chained like a rock musician, he makes Johnny Fever look like Les Nessman. He’s lived the part, too. In a life balanced between family and blue collar jobs and being a road musician from Bonnyville to Edmonton to Nashville and back again through all points between, Bellamy’s tastes run more to outlaw country music, to gritty songwriters, to real-life storytellers.