Sometimes you need time to reflect.A couple of years ago when I decided to step away from a great gig at Sportsnet 960- The FAN in Calgary, I simply wasn’t sure I’d ever be back on the air again.I was burned out, my marriage was on the rocks, I was pissed off at the NHL Lock Out, I couldn’t stand the constant need to relate everything to Corsi analytics, the lack of interest in sports history, distant new age players plus the cynical nature of some fans and some media had finally got to me.Basically… I was just tired of everything. So I decided to stand back and re-assess. Waaaay back.When I signed off in Calgary on December 7th, 2012, with Hockey Hall of Fame broadcaster Peter Maher sitting beside me, I don’t ever recall saying I’d NEVER be back. But I do recall saying it had been a hell of a ride and that I was so very lucky to have been able to do and see so much plus meet incredible people over my 25 year career. 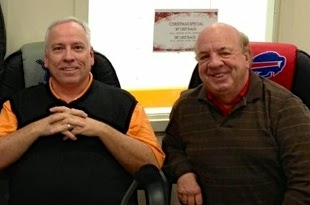 However over the last two years in the quality Sales Department at Newcap Radio in Edmonton I started to realize that broadcasting is simply ‘what I do’ and it’s in my DNA. You never really lose the contacts you build up and it was still great to touch base with so many friends in the sports business. But every time I’d swap a story or share a laugh I realized how much I was missing things.

Many a broadcaster and even a few sports fans told me I was making a mistake, that I still had plenty of offer. Well… I guess we are going to find out.

Time to get back at it… with a twist to keep it fresh. My ‘family’ at Newcap offered up a perfect gig that made it impossible to say NO.

So starting Monday November 3rd, I will be joining the morning shows ofCFCW, K97 & CAPITAL FM in Edmonton.

My new gig will be to present news and sports on all three stations. But the main goal is to deliver the information package in a casual, relaxed manner and to fit into all three morning shows seamlessly.

I’ve always loved News as much as Sports, so this is going to be very exciting for me and I eagerly look forward to the challenge.

Newcap has also given me the thumbs up to continue with this blog and have also encouraged me to consider getting a podcast up and running.  So once I get myself firmly established and settled into the new position, I will move forward with both aggressively. I also promise on both the blog and podcast to focus on ALBERTA sports issues as I have many friends and followers in both Edmonton and Calgary.

The time to reflect is over… let’s get this monster back up off the table!