in 1912, singer Kenny Baker was born in Monrovia Calif.  He broke into bigtime radio with Jack Benny in 1935, and appeared in movies & radio for the next 20 years, including his own daytime radio variety show Glamor Manor in the mid-1940’s.  Baker died Aug. 10 1985 at age 72 after a heart attack.

On this day in 1929, “The National Farm and Home Hour,” a rustic variety series which first aired locally for a year on KDKA Radio in Pittsburgh, made its national debut on the NBC Blue network (later known as ABC), sponsored by the Montgomery Ward department stores. Don Ameche and Raymond Edward Johnson were featured, along with music and entertainment by The Cadets male quartet, Jack Baus and The Cornbusters and Mirandy of Persimmons Holler.  In 1945 the “Hour” moved to NBC Radio where it continued until early 1958.

“Death Valley Days” joined the Tuesday night schedule on the NBC Red network, and became one of radio’s biggest hits. The 30-minute, Western-adventure series was sponsored for years by 20-Mule Team Borax, a laundry-additive mineral extracted from Death Valley. The program moved to TV in 1952 where it was hosted byRonald Reagan, and continued until 1975.

On this day in 1933, the first NBC broadcast of the “National Barn Dance” 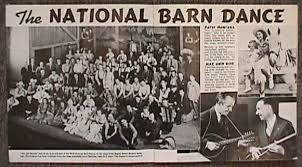 began with the theme song, Hail, Hail, the Gang’s All Here. The half-hour country music and comedy show, originally heard on WLS, Chicago since 1924, moved to the Blue network this night. The National Barn Dance was one of the very few radio shows to charge admission!

On this day in 1935, listeners to Mutual first heard the program intro “Calling all cars…” as The Adventures of Dick Tracy debuted on the network. Based on the comic strip created byChester Gould, the 15-minute detective show was heard 4 or 5 times a week, usually at 5:45 pm, sponsored by Quaker Puffed Wheat and Quaker Puffed Rice.

On this day in 1940, the kids’ radio serial “Captain Midnight”, already a hit locally on WGN Chicago, went coast to coast on Mutual. 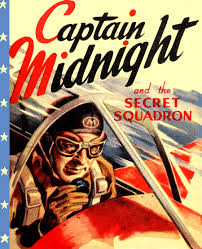 The Captain flew his single-engine plane all over the place fighting crime.  Ovaltine dropped its sponsorship of Little Orphan Annie to climb on board with Captain Midnight.

Also this day in 1939, the very first college football game was televised featuring Fordham vs Waynesburg at NYC.  Very few TV sets were in circulation at that time. 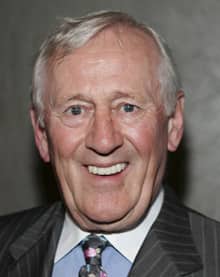 was born in St. Boniface Manitoba. In 1979 he won the Tony Award as Best Actor for his work as the title character inSweeney Todd. He’s also won the Canadian Genie for best actor in “One Man.” On TV he was a regular on Murder She Wrote, and lately has done some excellent work in the series Blue Bloods and Brotherhood.

On this day in 1942, singer Frankie Lymon of Frankie Lymon & the Teenagers, was born in Harlem New York City.  The group’s first hit in 1956, ‘Why Do Fools Fall In Love’ was their biggest. He died from a drug overdose on 28th February 1968, aged just 25.

On this day in 1947, “Look sharp … feel sharp…” The World Series came to television for the first time. The New York Yankees beat the Brooklyn Dodgers 5-3 in game one. The Gillette Safety Razor Company and Ford Motor Company were the sponsors. Together, they paid $65,000 for coverage of the entire seven-game series!

a portion of radio’s “Grand Ole Opry” was televised for the first  time. Nashville’s WSM Radio had been airing the Opry since 1925. debuted on NBC-TV (almost 10 years to the day after Red first got his own radio show). America’s “Clown Prince of Comedy” was a hit for years on radio and an even bigger one on TV.  Later, he would move to CBS-TV where he remained a television fixture for a total of 20 years.

On this day in 1955, actor James Dean was killed in a two-car collision near Cholame, Calif., at age 24.  Although best remembered for his limited work on the big screen, he actually appeared in many more live & filmed dramas on such 50’s TV anthologies as Studio One, Kraft TV Theatre, Lux Video Theatre, Philco Playhouse, US Steel Hour, and Rob’t. Montgomery Presents.

On this day in 1955, “The Adventures Of Champion” debuted in TV syndication. This children’s western-adventure spinoff from “The Gene Autry Show” lasted just one season, 26 episodes.

On this day in 1960, the first prime time TV cartoon show, The Flintstones premiered on ABC.  It continued there until 1966.

On this day in 1963, The Beatles returned from a two-week vacation to record “Money (That’s What I Want)” and “I Wanna Be Your Man” at the EMI Studios in London.

On this day in 1965, Scottish singer/songwriter Donovan made his U.S. television debut on ABC’s weekly pop music showcase  “Shindig!” Also appearing were The Hollies, the Turtles and the Dave Clark Five.

On this day in 1967, after much pressure from competing pirate & private stations, BBC Radio finally started its own popular music station.

The first song on Radio One was “Flowers in the Rain” by The Move. Former Radio Caroline DJ Tony Blackburn was the first presenter on air. Second song was “Massachusetts” by the Bee Gees.

Also in 1967, John Lennon and Paul McCartney appeared on the syndicated “David Frost Show” to talk about the virtues of transcendental meditation as taught by the Maharishi Mahesh Yogi.

On this day in 1968, Diana Ross & the Supremes released what would soon become their 11th #1 song, “Love Child.” In fact the other two Supremes Mary Wilson and Cindy Birdsong did not appear on the track; they were replaced by Motown backup singers.

On this day in 1969, the album “Crosby, Stills and Nash” won Gold Record certification. The good news was blown away by the death of David Crosby’s “girlfriend/love of his life,” Christine Gail Hinton, in a head-on auto accident in northern California. Crosby spent years trying to cope with the tragedy.

On this day in 1972, UK pirate station Radio Caroline started broadcasting again and continued to broadcast until the MI Amigo sank in March 1980.

On this day in 1973, Vancouver radio station C-FUN was “born again.”

When ownership gave up the call letters for the ill-fated CKVN all news experiment in 1969 the call had been grabbed by a station on the east coast.  On this day it was back where it belonged. Les Paul‘s ex-wife & his multi-track recording partner on scores of hit records, Mary Ford died at age 53 of complications from diabetes. She had lingered in a diabetic coma for 54 days.

On this day in 1978, the song “Kiss You All Over” by Exile topped the charts and stayed there for 4 weeks.

On this day in 1982, the ensemble sitcom set in a Boston bar that became national appointment television Cheers had its premiere on NBC.  The show that introduced us to Ted Danson ran for 11 seasons.

On this day in 1983, bandleader Freddy Martin, who played for years at Hollywood’s Coconut Grove, and at San Francisco’s Hotel St. Francis, who also hired Merv Griffin as a boy singer, died at age 76.

On this day in 1984, the pilot episode of “Murder, She Wrote” starring Angela Lansbury aired on CBS.

On this day in 1985, shock jock Howard Stern got fired from New York’s WNBC.

On this day in 1987, the TV special “Roy Orbison and Friends, A Black And White Night,”was taped at the Coconut Grove in Los Angeles. Bruce Springsteen, Bonnie Raitt, Tom Waits and Elvis Costello were among the many performers on the show that has aired repeatedly on PBS.

On this day in 1988, John Lennon was posthumously awarded a star on the Hollywood Walk of Fame.

On this day in 1989, Neil Young was the musical guest on “Saturday Night Live.”  He sang “Rockin’ In The Free World.”

On this day in 1991, entertainer Liza Minnelli received her star on Hollywood’s Walk of Fame. Her mother, Judy Garland, has three stars on the famous boulevard. 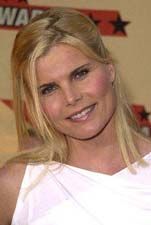 On this day in 1993, George Harrison and David Crosby made guest appearances on the fifth season premiere of the Fox animated comedy series “The Simpsons.’‘ Homer recounted his brief pop success as a member of the B-Sharps. Following a bitter break-up, the B-Sharps reunited on the rooftop of Moe`s Tavern to sing their one hit “Baby On Board.” George drove by in a limo and intoned “it`s been done.”

On this day in 1995, comedian/impressionist George Kirby,

who convincingly imitated stars from Bogart to Pearl Bailey on the Ed Sullivan Show, among others, died at age 71 from Parkinson’s Disease.

Also this day in 1995, Mariah Carey made chart history when she started an eight week run at No.1 on the US singles chart with ‘Fantasy’, making her the first female act to enter the chart in pole position.

On this day in 1997, Fleetwood Mac’s reunion show at the Continental Airlines Arena in East Rutherford, N.J., grossed a house record of $1,094,520.

became the first artist to ink a deal with DreamWorks Records Nashville. His signing instantly raised the stock of the new country label. On this day in 2001, the action-adventure series that made a star out of Jennifer Garner,”Alias,” (with Canadian Victor Garber featured as her boss), started its five-season run on ABC-TV.

On this day in 2004, at the UK’s Labor Party conference in Brighton England, U2’s Bono called on Europe and the United States to commit more resources to stemming poverty and AIDS in Africa.

On this day in 2006, the 21st edition of Farm Aid was staged in Camden, NJ, with performances by founders Neil Young, John Mellencamp and Willie Nelson. Gov’t Mule and the legendaryJerry Lee Lewis were also in the lineup. The event grossed $1.1 million in ticket sales for U.S. family farmers. “It is unfortunate that we have to continue doing this,” said Young. “I really hope that we don’t have to do Farm Aid forever.”

Also in 2006, Justin Timberlake started a two week run at No.1 on the US album chart with his second solo album ‘FutureSex/LoveSounds’ which also became the biggest album ever for pre-orders on iTunes.

Still in 2006, yet another season of NBC’s Saturday Night Live got underway with The Killersas musical guests.

On this day in 2007, country music’s Keith Urban crashed his motorcycle on the way to an Alcoholics Anonymous meeting not far from his home in Sydney Australia.  The 39-year-old, who suffered only scratches, claimed he was being chased by a photographer at the time. 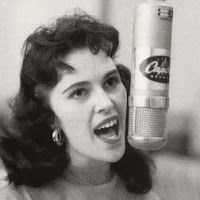 On this day in 2009, Wanda Jackson Way was dedicated in the rockabilly singer’s hometown of Oklahoma City.

Still in 2009, Bruce Springsteen played the first of 5 sold-out shows to close out the life of Giants Stadium in New Jersey. At each concert the Boss performed one of his classic albums – “Born To Run” (twice), “Darkness On The Edge Of Town” and “Born In The U.S.A.” (twice) – in its entirety.

On this day in 2010, TV writer/producer Stephen J. Cannell, the creative genius behind The Rockford Files, The A-Team, Wiseguy, 21 Jump Street, Silk Stalkings, and The Commish, died at age 69, due to complications associated with melanoma.

On this day in 2012, Barbara Ann Scott, the only Canadian to win an individual gold medal in Olympic figure skating (1948), died at age 84.

Ottawa-born actor Vik Sahay (Chuck, This is Wonderland)  is 42.