In 1908, boxing’s reknowned blow-by-blow ace Don Dunphy was born in New York City.  For more than 50 years he was America’s foremost announcer of boxing matches on radio and TV. He called more than 2,000 fights, many of them over a 19 year span when he was the voice of Gillette’s Friday Night Fights. He called the Joe Louis-Billy Conn title bout in 1941 and the famous Muhammad Ali-George Foreman match in Zaire in 1974.   He died July 22, 1998 at age 90.

In 1945, Ann Southern starred on CBS Radio as Maisie for the first time, based on the MGM movie series. The 2-year network run was followed a 4-year syndicated version, featuring a who’s who of Hollywood radio veterans.

In 1948, “My Favorite Husband”, with Lucille Ball, became the gifted redhead’s first regular radio program on CBS. Lee Bowman, and later, Richard Denning (above), co-starred with Lucy as “two people who live together and like it.” She would use the character as a stepping stone to TV’s “I Love Lucy” three years later. 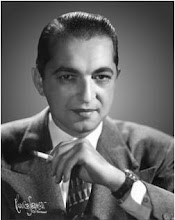 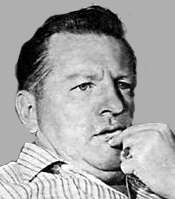 In 1996, long-time “Front Page Challenge” moderator Fred Davis (back right) passed away in Toronto at age 74.

In 2009, Michael Jackson started a posthumous seven week run at No.1 on the UK album charts with ‘The Essential Michael Jackson’, and was one of eight Jackson albums in the top twenty after the singer’s death on 25th June.

Actress/writer Louise Shaffer  (Ryan’s Hope, All My Children, The Guiding Light) is 72.

Toronto-born musician Robbie Robertson (of The Band) is 71.

Drummer Bengt Lagerberg of The Cardigans is 41.

Singer Jason Wade of Lifehouse is 34.

Actress Carissa Capobianco (The Game) is 26.