The 84-year-old, best known for the songs “Tie Me Kangaroo Down Sport” and “Vancouver Town,” has been convicted of 12 counts of indecent assault.

by Peter Walker, the Guardian.com 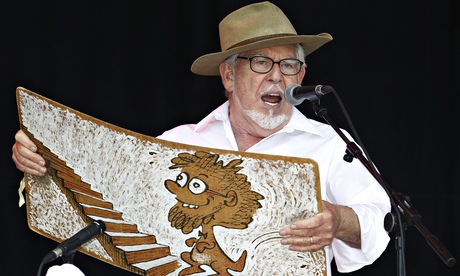 If it is a given that the cuddly, avuncular reputation built up by Rolf Harris over a 60-year entertainment career is in tatters following his conviction for indecent assault, it is also the case that this demolition job was already well under way before the verdict, mainly owing to his own defence case.

The majority of the counts on which Harris was tried related to claims that he began grooming and abusing the childhood best friend of his daughter, Bindi, when the girl was 13. Even if Harris had been acquitted it would have proved the most mixed of courtroom victories, given that his version of events involved confessing to a long sexual relationship with the damaged and vulnerable girl while insisting that the affair began when she was 18.

The Australian-born TV star had no option but to concede the point given that the victim’s father kept an abjectly contrite handwritten letter Harris sent him in the 1990s, after she told her family, apologising for the “misery” he had caused the woman.

Under dogged cross-examination from the prosecution QC, Sasha Wass, Harris was apparently at a loss to explain why, as he wrote in the letter, he felt “sickened” by himself over the affair. What he failed to spell out was surely evident to everyone else sitting in the courtroom: even if it is not illegal to have sexual contact with an 18-year-old friend of your daughter, 35 years your junior, who is staying at your home and whom you have known since she was two, for most people it is nonetheless a gross abuse of trust.

Harris tried to characterise the relationship as “loving” as well as mutual, but even his censored version, when picked apart by Wass, appeared stark and mechanical: eight mainly fumbling sexual incidents in 11 years, with barely a conversation otherwise, let alone expressions of interest by the older man in the woman’s eventually chaotic and alcohol-fuelled life.

Some of the courtroom exchanges were withering for Harris. “Your relationship had been sexual for 10 years and the only conversation you can remember is about cleaning your sperm off the sheets?” Wass asked him. Harris agreed, somewhat reluctantly summarising the relationship as “sex with no frills, now and again”.

The truth, of course, was more damning still: he groomed and groped a child, his daughter’s friend, gaining a sexual hold over her that lasted till she finally broke away in her late 20s, while also assaulting a series of other young women and children.

READ THE REST OF THE STORY VIA THIS LINK.