Entercom Alternative “107.7 The End” KNDD Seattle has revamped its identity as it launches as “2 Minute Promise” to never have commercial breaks longer than 120 seconds.

The station will have more frequency stopsets, but promises to have a spotload half as long as the rest of the commercial music stations in Seattle, while playing more music. KNDD is not the first station to hype shorter stopsets, but one of the first to follow in the path of streaming services such as Pandora and ITunesRadio that have short commercial breaks on consistent basis.

As part of the revamp, which also includes a new logo for the station, KNDD is placing additional emphasis on its #NewMusicDiscovery program to introduce new songs to its playlist.

Entercom’s 107.7 The End, whose groundbreaking approach defined alternative music when it hit the airwaves in 1991, today announced an unconventional move to redefine how it presents radio to its listeners and its advertisers. Re-imagining the radio experience entirely, The End has unveiled the “2 Minute Promise.” The End will not only play half the commercials compared to other radio stations in Seattle, but will also play the most music of any station in the market.

“Since its inception, The End has been a leader in new music discovery and a radio innovator. The time has come for a radio station to make a stand for our listeners and our advertisers,” said Garett Michaels, Program Director of 107.7 The End. “The End’s ‘2 Minute Promise’ gives our listeners exactly what they’ve asked for, more music with fewer breaks, and is a groundbreaking new way to showcase our advertisers with less clutter and more music.”

Jack Hutchison, Vice President and General Manager, said, “We are proud to be the first station in the United States to offer this bold, innovative approach to radio. We know our listeners will be more than excited about this change and we are just as excited we can provide our clients an incredibly unique platform to showcase their message to our End listeners.”

107.7 The End has played a pivotal role in the history of the Seattle music scene. A leader in new music discovery, the station helped launch the careers of Nirvana, Pearl Jam, Soundgarden, Weezer, Beck and more. Deck the Hall Ball, The End’s annual holiday concert, is in its 22nd year and features the biggest artists in alternative music. Since 1997, The End has recorded more than 250 EndSessions, including performances from Foo Fighters, The Black Keys, Muse and Arctic Monkeys. 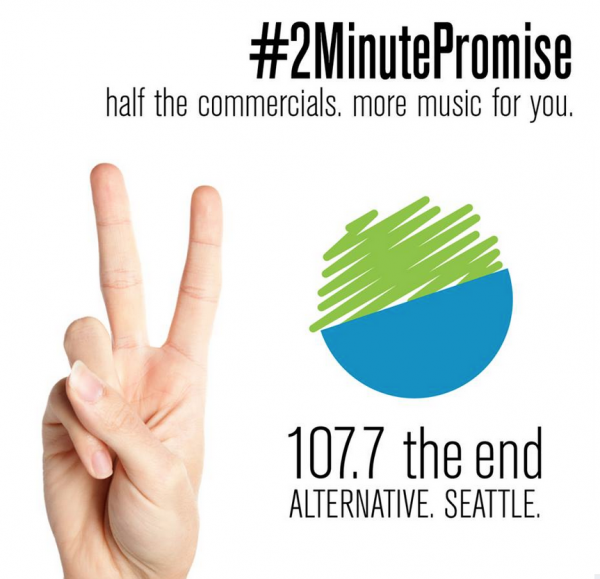