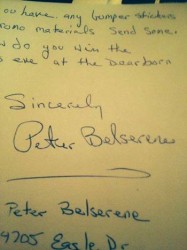 I have a nice story I think. As I prepare for a domestic shuffle, I’ve been trying to get rid of clutter. Endless boxes and endless memories that need to be sorted through.
This morning I came upon a box labeled “Career In A Box.” I have a couple of those, full of old audio of me from the seemingly 300 radio stations I have worked at and newspaper clippings and fake gold records sent to me from record companies as thanks for playing their artists songs ‘on the air’ and the obligatory pictures of me with famous rock stars. I remember those pictures being taken, most of them anyway!

That stuff is fun and all but for those of you who know me, what’s been of paramount importance over the years, for me, has been “real connectivity” with a REAL audience. Just people. When achieved on that authentic and sincere level, it’s pretty magical and I love it!

Years ago, I worked in Detroit at a pretty big station. It had a huge audience and an extremely powerful transmitter signal to go with it. Sometimes, after a combination of signal strength and a radio station signal/weather related phenomenon known as “skipping”, I would get correspondence from as far away as Iceland! Florida seemed to be a particular hot spot.

The photo attached is from a letter I received and dated Dec 15th, 1989. It’s from Peter Belserene of Florida. Mr. Belserene had some wonderfully kind and nice things to say about me and my program in that note! Even mentioning some of my work with The Capuchin Soup Kitchen in Detroit. It’s not just yesterday that I started helping feed hungry people you know:)

As I read the note and reminisced about those wonderful times and the sense of accomplishment, I could not recall if I had ever returned his letter and thanked him properly. As I am in somewhat of an um, introspective frame of mind right now, I decided to rectify that. Twenty-five years later!
Sadly, my online search for Peter, revealed that he had passed away in 1996 at the age of 38.

Closing doors on the past is always difficult, for myriad reasons. If we’re being honest and I do try to be with you, I’m having some difficulty with the whole “door closing” thingy right now. The last thing I needed today was ANOTHER one. I was determined to drill down this “real connectivity” loop. As I continued to dig, my search led me to a Mark Belserene, who seemed to be Peter’s closest relative, although I couldn’t be sure if he was even related.

I collected my thoughts to make sure I did not sound like a lunatic when cold calling this man about his possible deceased relative. Mark picked up after two rings. I told him who I was and whom I was calling about. Mark Belserene, turns out, is Peter’s brother! As I began to explain to him my rather bizarre story, it did not take long to convince him I was the real thing! I read to him, the letter to me, from his deceased brother, that was full of kindness and happiness and fellowship and goodwill and wonderfulness and as I did, I could hear him start to cry on the other end of the phone.

When I finished, he told me that Peter died in 1996 from cancer. “Way too young” he said. He told me that Peter was a great guy who loved electronics and anything to do with radio. He was not surprised at all that Peter would have taken the time to write me a letter. He also said that there is not a day goes by that he does think about Peter and misses him dearly. He also thanked me profusely for making the effort to do this “nice thing” and provide him with yet another wonderful memory to add to his collection about his brother. I feel a little better.

Dave “Buzz” Reynolds has been rocking the decks since he was barely toilet-trained, when he rifled through his parents’ vast and eclectic record collection and started experimenting with the controls on their old walnut-veneered record player. Since, he has worked some legendary radio stations including 680 CFTR Toronto, CHOM 977 Montreal, CKLW Detroit and MIX 99.9 Toronto (Canadian Radio Station Of The Year) Dave has recently returned to Toronto from Vancouver Island B.C. where he spent the last 6 years building radio stations, doing freelance Voice Over and cataloging killer whales. A Social Media Award Winner, National Voice Over Artist and Radio Station Branding Expert. Dave now consults with broadcasters on Social Media strategy for radio.  Dave can be reached at [email protected]

Audio and other assorted rich media can be found on