Scott Fox & Kat Callaghan are returning to Ontario’s 91.5 The Beat

KITCHENER, September, 25, 2019 – It’s official, Scott Fox and Kat Callaghan are coming home. 91.5 The Beat, the Tri-Cities’ #1 hit music station, announced today that the popular on-air team have been tapped to host the station’s new morning show, The Beat Breakfast with Scott and Kat. Fox and Callaghan, both from Cambridge, can be heard across Waterloo Region weekdays from 5:30 a.m. – 9:30 a.m. ET beginning Monday, September, 30.

“Scott and Kat are an incredibly talented morning show team and we’re very excited to bring them back home to Waterloo Region,” said Lars Wunsche, Regional Director for Corus Radio. “Not only are they some of the best hosts in the business, but they live here and love it – I think that will really resonate with listeners every morning.”

Fox and Callaghan come to The Beat after more than seven years co-hosting the Z103.5 morning show in Toronto. During that time they received numerous accolades; including honours in the Toronto Sun Readers’ Choice Awards Best Morning Show category four times, and winning Top Choice Morning Show from the GTA Top Choice Awards three times. With both previously having successful stints on-air in KW as well, their longtime fan base in the area will be able to enjoy their new show on The Beat.

“I’m really excited to be coming home! 13 years ago I started my radio journey at 91.5 The Beat, now I’m thrilled to be able to wake up the region I love so much and know so well,” said Kat Callaghan.

“My career may have started in Toronto, but being born and raised in Cambridge, there’s something really special about returning home to live out this dream of being on the radio in the Tri-Cities,” said Scott Fox.

Alongside the arrival of the new morning show, former The Beat mainstay Mr. D returns to the station to host in his familiar evening timeslot (7 p.m. – 12 a.m. ET). For more information visit 915thebeat.com.

Scott Fox is leaving Z103.5 in Toronto. I believe this is the second time he left. When he was gone the first time the ratings tanked, not that they were good to begin with 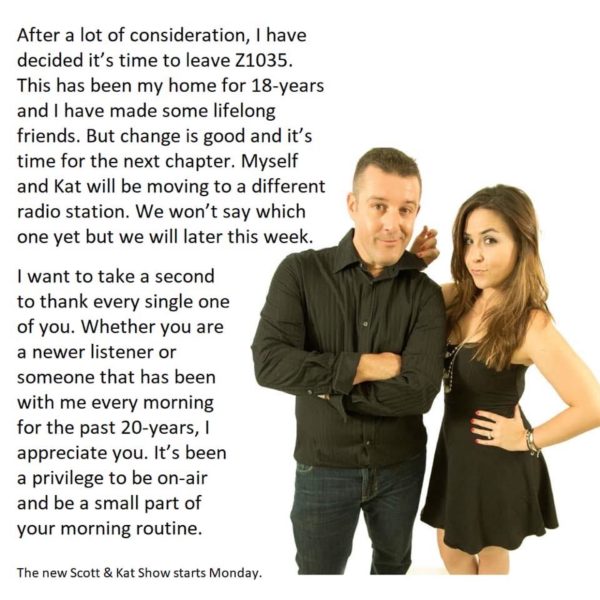 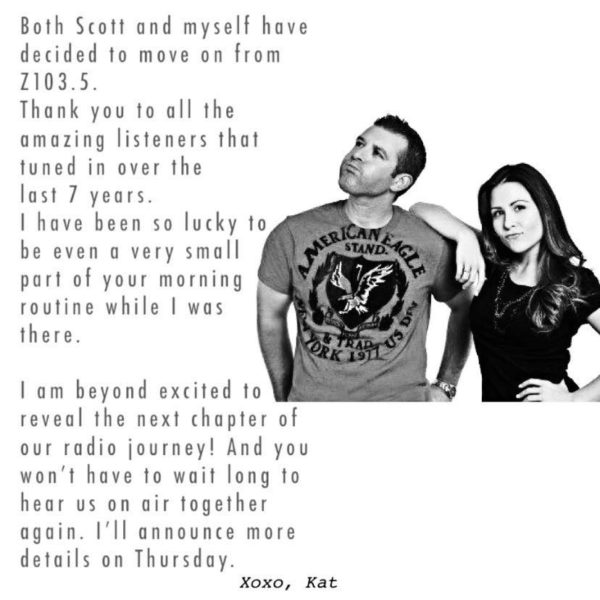 The rumour is they are replacing the morning show at 91.5 the Beat Kitchener & Waterloo

I listened to them every morning the only time I did not is when Kat went on Mat. Leave this is the first time I saw a pic. Of her I always had a vision in my head what she looked like and I New she was good looking from ppl that would call in and and the way Scott would talk about her! But wow what an amazing Woman quite breath taking !