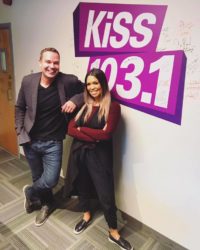 Wednesday, Aug 7, I was informed that yet again changes were made to the on-air lineup at KiSS Victoria. When I went to investigate the listings for the morning show of Dez and Jay, and the afternoon show of Johnny Novak was removed from the website. Meaning that all three local hosts were no longer on the station. I later learned that Dez, along with Johnny and Jay were all let go, however Dez is still with Vancouver Rogers. When I reached out to the station for comment the response was just a basic reply. There have been changes made at the station. More information will be available soon. Interesting to note that on the long weekend, both Dez and Jay made country related posts on facebook. Aug 2 Jay posted a pic of him dressed up with a cowboy hat and a country look, with the caption Have fun at Sunfest Country, everybody!! Dez posted several pics and called Sunfest Country a new tradition and said it was the best weekend ever. My assumption when I saw the news today was that Rogers prepping a flip to country. It has long been rumoured that country would come to Victoria, and with Virgin radio in Victoria now it would make sense that the long-struggling KiSS would flip to country.

If the news is true and Johnny was let go, he came from PEI at the end of March. Let’s hope he lands back on his feet asap.

It’s going back to JACK

Listening tonight, and there were at least five songs in a row before I heard one single ID.

As of midnight the station is being identified only as “103-1”, with occasional teasers about something coming. The music mix is more of a Hot AC.

Give dullards driver’s licenses and they will take their vehicles into concrete abutments.
Give those same people radio station licenses and….

What say Rogers just give the 103.1 frequency back to Camosun College ? That way the station can go back to being a non-profit on purpose, not by mistake.

Rumour has it … back to JACK on Thursday the 15th.

Will be Country. I work at a business that advertises with them and they told our boss it would be Country. Mystery solved.

If and when its country, and it probably will, have a classic country show for the weekend.I am posting from vancouver area here

It looks like KISS Radio in Victoria is officially done for good. What else can I say about this?

http://www.kiss1031.ca is still up, showing “Victoria’s #1 for Hit Music”. I guess they haven’t bothered to update it announcing a coming change.

Bus home from work goes right past Rogers’ building on Fort Street. KISS logo is still on the building–but KISS vehicles are absent from parking lot. Tuned in to 103.1 for a few minutes yesterday and heard ( in between standard issue “KISS” music, The Who–Won’t Get Fooled Again, and some guy (probably in a cowboy hat) singing about his pickup truck and beer.

The station has been inconsistent for so long. I enjoyed Dez/ Jay and Johnny. I hope Johnny will get something else he was really fun to listen to.

Loved Dez & Jay … hope they’ll be there when the announcement is made tomorrow!