1/27/2017 by Mike Barnes and Duane Byrge, The Hollywood Reporter 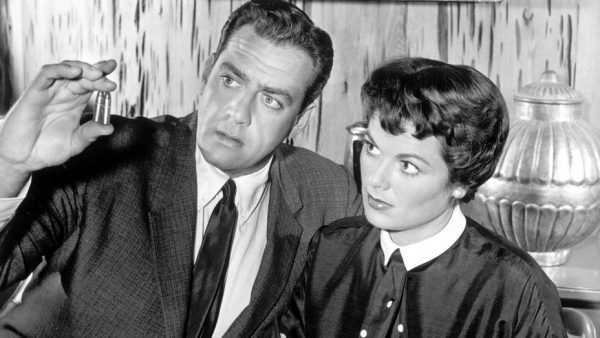 The Emmy-winning actress, a former starlet at RKO Pictures, starred opposite Raymond Burr on the long-running legal drama.

Barbara Hale, who played the steadfast secretary Della Street opposite Raymond Burr on the legendary courtroom drama Perry Mason for nine seasons and 30 telefilms, has died. She was 94.

Hale, a former contract player at RKO and Columbia who made more than 50 films before landing her signature role, died Thursday at her Sherman Oaks home in Los Angeles.

Survivors include her son William Katt, best known as the star of the 1980s ABC series The Greatest American Hero. He reported her death on Facebook.

“We’ve all been so lucky to have her for so long,” Katt wrote. “She was gracious and kind and silly and always fun to be with. A wonderful actress and smart businesswoman, she was most of all a treasure as a friend and mother!”

Hale was mulling retirement to raise her three young children with her husband, actor Bill Williams (The Adventures of Kit Carson), when producer Gail Patrick Jackson approached her about playing Della on Perry Mason.

She quickly accepted the gig when she discovered that Burr, her old friend from RKO, was going to star as the fictional defense attorney in the series based on the Erle Stanley Gardner mystery novels.

Hale received two Emmy nominations (winning in 1959) for playing the quiet beauty who was the rock of stability on Mason’s team. She liked the fact that Della was unmarried and without kids so it wouldn’t confuse her real-life children.

Perry Mason, with its distinctive Fred Steiner theme song, “Park Avenue Beat,” aired on CBS from 1957-66 as the first network hourlong show to be filmed, not done live.

In 1985, Burr and Hale came back for the NBC telefilm Perry Mason Returns to kick things off again. (It also marked the first time that Katt played Paul Drake Jr., the son of Mason’s right-hand man/private investigator portrayed by William Hopper on the CBS original.)

READ THE REST OF THE STORY  HERE  AT TheHollywoodReporter.com