Our friend and PSR Contributor Mark Summers presents this classic aircheck
Bill Matheson and Bill Jackson. The 11-2 Show ran Monday to Friday from 11am to 2pm from 1976 to 1992 on 930 CJCA in Edmonton, Alberta. The Bill and Bill Show was a solid number one show in the ratings, far ahead of any other radio show on at the time. It was an interactive “anything Goes” format where listeners could call in on any topic at any time. 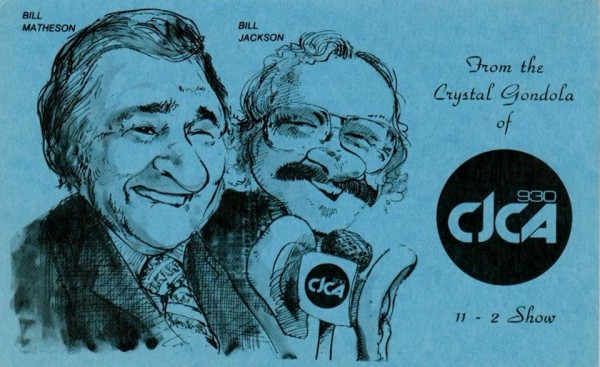 Does anyone remember the show when Bill said,
All cat owners are smokers ” ?

Yes, he also said that they played bingo!

One of the funniest radio shows ever.

I was paving in Barrhead AB in 1980 and a running joke on the show was all the government money flowing into Barrhead because of so many retired Tory MLA’s moving there. It is true, the main street of Barrhead had pavement over a foot thick. Doing paving and listening to Bill and Bill–felt like the center of the world.

Hot news of the day would be Pierre Trudeau doing something to bone the West (yet again) but someone would call in to say they’d seen their first Robin on the farm and off they’d go for 3 hours talking about birds of Alberta. There was nothing else like it on radio, then or now.